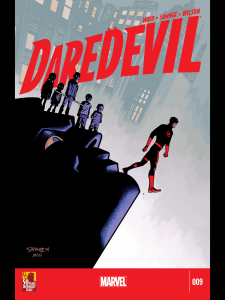 *You will read this book.*

From his very inception, Matt Murdock, the Daredevil, the Man Without Fear, has lived a life of tragedy. Stan Lee, Bill Everett and Jack Kirby created a character who’s entire basis of super-heroism is based upon tragedy and a fateful accident. Most superheroes follow this trope; Batman with his parents; Spider-Man with Uncle Ben, but most don’t follow this through with years of continuous torment. Daredevil only ever loses—he saves the day, but it never seems like he can ever catch a break.

And then Mark Waid and Chris Samnee stepped in.

Forty-five issues into Mark Waid’s run, with Chis Samnee drawing and aiding in most of those issues, it has become clear that Matt Murdock can actually win some things.

Mark Waid is almost an auto buy for me. His ability to understand characters and then place them into situations that bring both the best and worst out of them, allowing those differences to rest in an uncomfortable but satisfying dissonance is a special thing to behold. Mark Waid and Chris Samnee, credited as storytellers, know Matt Murdock. Waid began this run with the interest and plan to begin “tweaking the adventure-to-depression ratio a bit and letting Matt win again.” The ratio has been tweaked and we have seen wonderful moments throughout this book that culminate in a wonderful smile from our favorite Man Without Fear.

But the ratio still has it’s other ugly side, resting in that dissonance that breaks our hearts like the ringing ballad of a minor chord.

Waid and Co. have also done an excellent job at bringing in some of Daredevil’s, what many consider sup-par, villains and giving them a depth and meaning that helps you look past their quirkiness. He knows Daredevil and he knows how to make his villains strike emotionally as well as physically.

Though Mark Waid and Chris Samnee have run Matt through the mud like those who have written before them, they have let him breathe. They have let him smile. But no demon can be held at bay forever. At some point, the past comes knocking and you can’t run, no matter if it is across the United States.

Last issue, we see that the Purple Man has spent years developing his own, well, “planned parenthood”. His method was disturbing and sticks with you, but it near pales in the unsettling monsters he created in his “children”. The power to persuade is one that corrupts. With one sentence, a person can be persuaded to end their own life, or to follow the commands of a whispering sociopath. Man would commit despicable evil with this power, but even that horror cannot stand next to the terror the hearts of children could commit.

Do you remember when you wanted something so badly, or how strong your emotions felt when you were a child? That primal passion threatening to suffocate you because you didn’t get what you want? That you couldn’t fix everything around you, no matter how much you cried.

Imagine if you could change that—with a mere few words.

That’s what Daredevil faces now. He not only faces terrified children who only want to get what they want, but the inner child within him. The one that is hurting because of his past. The one that is pretending to be an adult. When the broken children before you remind you of everything that you’ve been through, how can you not break yourself?

Matt Murdock has been able to smile, he’s ridden flying solar surfboards, he’s learned to love again, but he’s only been suppressing that which is inside him: the lonely child of his youth, battered and scarred, desperately wanting everything to be fixed and to go away.

Buy this book, buy every Daredevil book with Mark Waid’s name on it. Waid and Samnee’s story and presentation married with Matthew Wilson’s tone setting colors and VC’s Joe Caramagna’s clever lettering is a concoction of a comic everyone should taste. Marvel Comics is releasing some stellar books with Ms. Marvel, Captain Marvel, the new Hawkeye coming soon written by Jeff Lemire, and Daredevil is the cream of the crop. It’s one of the best books hitting the stands every month that hardly any person is talking about. Buy the whole series Waid has created. It will break your heart, but also teach it how to sing, even when you can’t see past the lines and the hurt of the past.