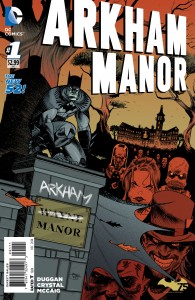 Arkham Manor #1 takes place after the events of Batman Eternal #30 (which comes out a week after this issue). If you’re not keeping up with Batman Eternal, don’t worry, Duggan does a good job of covering the story high points early in the book. All you need to understand is that Arkham Asylum has been destroyed, and Bruce Wayne has lost his fortune no longer owns Wayne Manor. Gotham’s Mayor Hady decides to convert Wayne Manor into the new home for Gotham’s criminally insane.

What’s interesting in this story — besides the premise —  is how Bruce and Alfred react to the invasion and transformation of their former home. How would you feel if the house you were raised in was not only taken from you, but perverted into an asylum for you enemies? How would feel knowing the Scarecrow, Zsasz, or some other murderous villain was living in your parent’s bedroom? Duggan touches on Bruce and Alfred’s feelings briefly, but skillfully enough to make them believable and even relatable. What’s also cool is that Bruce still occupies the Batcave, right below Arkham Manor!

The art by Shawn Crystal fits not only the new tone that Mark Doyle has brought to the Bat-books, but also the type of story being a told…a seemingly gritty murder-mystery. The art style is somewhat dark and scratchy, but also cartoony. For some reason that I can’t put my finger on, the art reminds me of Batman the Animated Series. It’s a different style, but there’s something about it that captures the dark, serious, fun of that classic animated series. Crystal’s art is aided by the moody, dramatic, and cinematic colors (teals, pale yellows, dark blues) of McCaig. Arkham Manor is a quiet book, with an emotional weight that is lightened by the promise of an intriguing whodunit mystery.

Buy it! If you’re a fan of the Dark Knight Detective and the new Bat-flavor Mark Doyle is bringing to DC Comics, Arkham Manor will hook you with its $2.99 first issue.