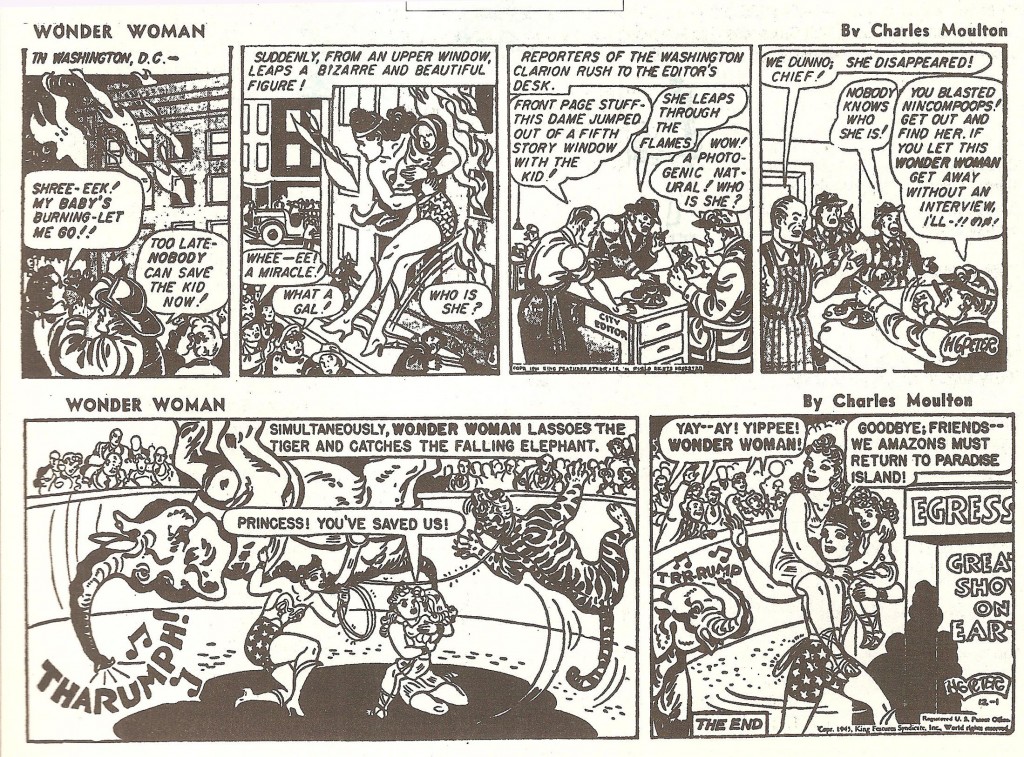 As part of their on-going effort to preserve and illuminate the broad spectrum of newspaper comic strip history through their Library of American Comics initiative, the fine folks at IDW (in conjunction with like-minded folks at DC)have just released Wonder Woman: The Complete Newspaper Strip that collects the entirety of the short-lived 1944–1945 comic run in one beautifully turned-out volume whose contents will be new to virtually all fans of the Amazon Princess. 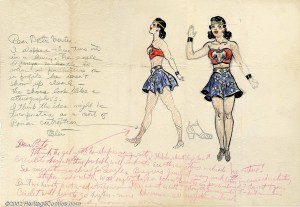 Not only does designer Dean Mullaney provide all the strips, but he also includes rare promotional material and artwork, and an informative introductory essay by Bruce Canwell.

Brought to newspapers by her creators, Dr. William Moulton Marston and artist Harry G. Peter, the strip launched in May of 1944 in newspapers serviced by the King Features Syndicate (which also distributed Flash Gordon, Prince Valiant, The Phantom, and Popeye), and opened with a one-week introductory adventure to showcase Wonder Woman’s powers and ethos, and then settled into a re-telling of the struggle of the Amazons and Diana’s birth, here-in discovered from an ancient scroll, but we know that it’s from 1942’s Wonder Woman #1!

Within the six-times-a-week strip, Messrs. Marston and Peter would tell original tales, as well as re-cast stories from the pages of Wonder Woman and Sensation Comics for this new medium, bringing along Diana’s supporting cast of Steve Trevor, Etta Candy, and of course, the Amazons and Queen Hippolyta. In one epic long-form tale collected here that ran from November 1944 through to March of 1945, we receive our introduction to Wonder Woman‘s arch-nemesis, Priscilla Rich, The Cheetah, whose story springboards from her first appearance in Wonder Woman #6, before moving into some different shenanigans. 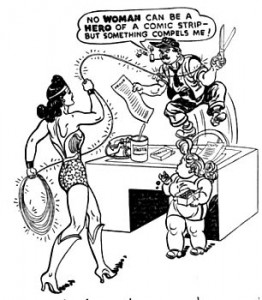 The Wonder Woman daily newspaper strip contains all of the elements that were present in the comic books of the period that featured her, showcasing for all to see through the depiction of Diana as a heroine who was atypical of much of her comic book brethren in her compassion, providing for us a glimpse of what Dr. Marston felt was the “new woman” whose innate strength of character would lead the world to a better place, and all whilst telling a rollicking adventure tale. In concert with the singular art of Harry G. Peter (perhaps even better in B&W than in the four-color comics!), these strips collected by IDW present a long-unseen window into the growth of the most important super-heroine in comics history.

VERDICT: If you’re at all a fan of the Golden Age adventures of Wonder Woman, or have had your interest piqued by my many references to that period, you owe it to yourself to pick up this handsome edition from IDW; at $49.99, the price might seem a bit steep, but you will be rewarded many times over, particularly as the DC “Archive” program seems to have slowed to a crawl.

ps) Forgive the incorrect dates on the header image; the cover copy was changed at the last minute, and the only large picture available has the original, but wrong, dates! I can assure you that the book cover says “1944–1945”!

Sorry for any confusion, rrr