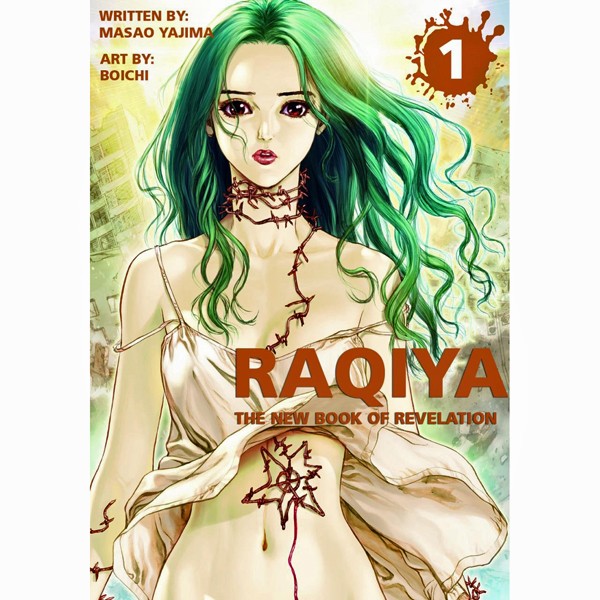 If you had the chance to save your family from a horrific accident, would you take it? What if that chance involved making a pact with a demon? For Luna, there’s no question. In Masao Yajima and Boichi’s Raqiya: The New Book of Revelation, the events of the impending apocalypse center around one young girl’s decision.

On a trip to Las Vegas when she was seven, Luna’s family was hit by a truck and died in a fiery explosion. Their bodies were burned beyond recognition. Traumatized and alone, Luna surveys the bodies of her mother, father, and brother in the morgue. The blood and bones of her family morph to become Abraxas, a mysterious demon. The demon is gruesome; with massive horns sprouting from her blood-drenched head, gaunt wings, and a snake extending from the neck, Luna is stunned into silence. The demon spouts off prophecies about Norea, Adam Kadmon, and Eleleth. Between the crazy-sounding proclamations and blood-dripping appearance, Luna agrees with the pact to bring back her family in exchange for the delay of the oncoming apocalypse. The catch? Abraxas will claim her twelve offerings in seven years. In the meantime, Luna is granted more time with her family.

There are hints early on in the story that Luna blocks this terrifying memory. She grows up in America surrounded by her loving family and best friend. Luna is kind, sweet, and expresses an interest in Christianity. When the events of the pact she made to give her family more time catch up her, Luna’s life is suddenly turned upside down.

Though it was Luna’s confused decision that everything in motion, she is not an active agent in her own story. Many of the events of Raqiya: The New Book of Revelation happen to her. As the story progresses, it is the actions of the men in her life – her friend Isa, his friend Toshiya, and an old man named Aspirin Snow. These men, for one reason or another, find the urge to protect Luna. Luna, on the other hand, is more or less helpless despite her important role in Abraxas’ upcoming plans.

Luna’s future is dismal. With Abraxas claiming lives for her own plans, Luna leaves behind her a trail of destruction. On top of a demon twisting into her life, Luna has to deal with Christian cults that want her dead. Yajima and Boichi are setting up Raqiya to be an apocalypse story that brings together lesser known religious elements and mixes them with horror and death.

Raqiya has two volumes published so far in North American markets from One Peace Books. The release date for volumes 3, 4, and 5 has already been announced for February.