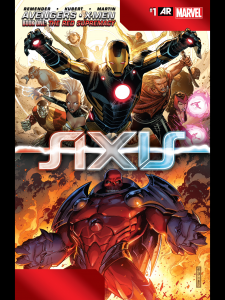 But you can come right in.

Rick Remender is one of few that I believe could fit so much of what is in these pages and keep the integrity of characters intact as well as he does. I, personally, due to cutting back my pull-list to save money, have not been keeping up with the Avengers or the X-Men for quite some time. Much of what has happened that is directly affecting this story actually happened before I started reading comics, you see, I missed Avengers vs. X-Men. What is wonderful: I jumped right in and understood.

The book does an excellent job of catching you up on the history leading up to the events you are about to feast your eyes upon in widescreen panels and summaries. So that, when the issue actually starts, it’s easy to find your bearing in a story that requires so much back-issue understanding.

It is a feat that the team should be proud of, if nothing else.

Thankfully, most of everything else is stellar all the same. We’re being taken through a narrative and plot that hinges on the impending doom, time running out. Rick Remender does well to let the bright personalities of the characters carry you through the darkness with Tony Stark using his charm, Thor being sarcastic and a rightful dig at Real Housewives.

There is a theme of unity here, especially on the side of the mutants, and the sentiments spoken and shown are poignant and tragically moving.

As Rick Remender does, many things are happening here, be it a discussion on brotherhood and family or it be the sins we hold within ourselves, the hatred we pretend to not have.

The premise and execution of this book is very, very comic book-y. It sits nicely within the meaningful magnitude the medium can deliver as well as deliver the drama and entertainment of Saturday morning cartoon (may they rest in peace).

Most often, superhero books these days, and the years past, have not been as stylized in the way that, say, Hawkeye or She-Hulk is today. The same bodes for this book as veteran superhero artist, Adam Kubert, presents Earth’s Mightiest Heroes and the Uncanny Mutants in a straightforward manner without becoming extremely pose driven. The art is moving and moody, drawing the reader in and not letting go. It isn’t distracting, it only exists and I mean that as a compliment. Its strong and confidently drawn lines with masterful colors by Laura Martin and Matt Milla keep the reader locked in to the narrative both visually and in prose, rather than divert attention to odd body language or off colors. The art brings the characters to life, rather than being a book of cartoons.

All together, with depth in writing from Remender, detailed and masterfully crafted art from the team, Kubert, Martin and Milla, coupled with the letters from Chris Eliopoulos, this team at Marvel have delivered a cinematic start to what looks to be an epic and meaningful event.

The total package is delivered so well, that I almost forgot about the individual parts completely.

My biggest hang up with this book is the weird AXIS border on several of the pages. It isn’t aesthetically pleasing and, personally, I find it to be really annoying. Unlike the art, it is distracting and pulled me out of the book every time it was present.

The Avengers and the X-Men are poised to face the biggest fight of their lives, the fight they have been battling since their inception. They fight the battle we fight today.

The fight against hatred and its ugly, ugly head.

Buy it—You don’t have to know what’s been going on in X-Men or Avengers to catch on to what is going on here. The art is stellar and terrifically consistent. Enjoy the fun and try not to bite your nails as you sit on the edge of your seat.