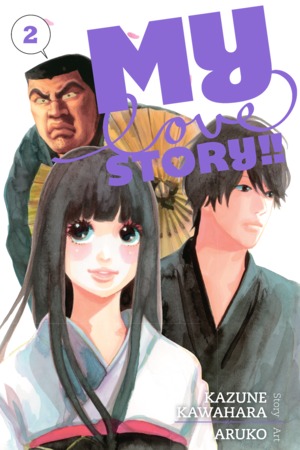 Shojo manga is full of tropes. Clumsy, youthful girls always fall in love with the tall, feminine, gorgeous cool guy in class. We’ve read countless stories about their relationship, and some of us have even swooned over the guy ourselves. My Love Story!! from Shojo Beat, an imprint of VIZ Media, turns convention on its head by bringing the focus of romance to the best friend of the traditional shojo hunk.

Meet Takeda, Nicest Guy Around. He’s considerate, extremely loyal, and athletic. The other men look him up to at his school, and he’s got a great family life. Takeda knows he’s got all this great stuff going on for him, but he’s got an issue gnawing at him in the back of his mind: he’s not conventionally attractive. Takeda is a large, robust teenager with equally large facial features. His physical demeanor wouldn’t be as much of an issue to him if he weren’t the best friend of the most attractive man at school.

Takeda and Suna grew up together. Where Takeda is loud and abrasive, Suna is quiet and gentle. Takeda is large and bulky, Suna is lean and delicate. All the girls Takeda has like throughout elementary and middle school have always fallen for Suna. Takeda recognizes his own “hideous” physique and has come to terms with being alone for the rest of his life.

Until he meets Yamato.

Takeda saves Yamato from a molester on the subway. Initially mistaking Yamato’s interest for Suna, Takeda slowly begins to realize that Yamato likes him. By the end of the first volume, Takeda and Yamato are in the beginning stages of a head-over-heels love.

Volume 2 continues to develop the relationship between Takeda and Yamato. Though Takeda and Yamato are not a visually compatible couple, the two sure have boundless enthusiasm for each other. It’s hard to tell why the couple loves each other so much; readers can see the initial attraction they have in each other – Takeda finds Yamato sweet and innocent, and Yamato is impressed with Takeda’s protective nature. The latest volume is full of short episodes about Takeda and Yamato’s relationship.

There are a lot of great things about this series so far. Takeda is a hilarious manga character. He makes the most insane faces and has the most intense demeanor. He’s so serious about being the best boyfriend to Yamato. Yamato is cute and adorable, but she’s not the focus of the story. The story is told from Takeda’s perspective, which is different from other shojo series. We only see Yamato from Takeda’s viewpoint, limiting insight into Yamato’s thoughts on Takeda. Finally, the juxtaposition of Takeda and his best friend Suna breaks stereotypes as much as possible. Where Suna is expected to be shallow, he shows a deep love for his friend and respect for the relationship between Takeda and Yamato.

Buy it! This manga is great for fans of shojo manga because of how unexpected it can be. Takeda is a great protagonist, offering both humor and sincerity. Even though this is the second volume of the series, the story is easy to follow. It is available from VIZ in print and digital.