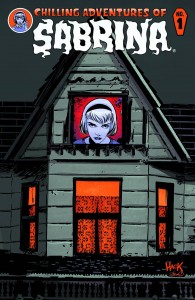 Throughout the decades, there have been several incarnations of Sabrina the Teenage Witch. She was first introduced as an Archie Comics character in 1962. In 1996, Sabrina was the main character in her own live-action TV series. She also starred in a few animated series and numerous novels through the 2000s. In October 2013, Sabrina was featured in the premier issue of the Afterlife with Archie comic book, in which she sets in motion, a series of events that result in a Riverdale zombie apocalypse! Following the success of the Afterlife with Archie comic, writer Roberto Aguirre-Sacasa teamed up with artist Robert Hack to chronicle the new (chilling) adventures of Sabrina. This isn’t the Sabrina from the old Archie Comics, the TV shows, or even Afterlife with Archie. These tales of Sabrina are set in her own universe, in her own timeline.

Sabrina is portrayed as young, independent, somewhat lost 14-year-old girl, starting her first year in high school. Like most 14 year old girls, she’s in an awkward stage where she’s becoming self-aware, developing feelings for boys, pondering her life and future, and feeling self-conscious about it all. Sabrina takes it all in stride though and comes off as a strong girl, ready to live her own life, not one dictated to her by others. She also doesn’t quite fit in anywhere. As a half-human/half-witch, she finds herself living between worlds, not fully in either.

The supporting cast of characters are written just as well Sabrina. She has a very strong and interesting group of characters around her. Her mother and father, two aunts, her familiar, schoolmates, and others all are introduced into the story naturally, and they develop their  voices almost immediately. Between the dialogue, story, and art, you’ll leave this book remembering each character.

The majority of Chilling Adventures of Sabrina #1 focuses on laying the foundation for the series. We learn about Sabrina’s parents, her life as a child, and the type of world she comes from. About half way into the book, the first story arc begins and near the end, the first villain is introduced — super creepy and perfectly executed by Aguirre-Sacasa and Hack. 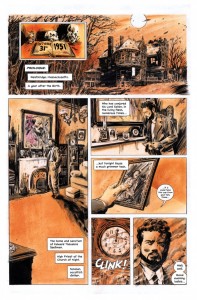 Each issue of Chilling Adventures of Sabrina will contain a reprint of a classic Sabrina the Teenage Witch comic from the Archie Comics vaults. In this issue, we’re treated to a reprint of Sabrina’s first appearance, from Archie’s Madhouse #22, written by George Gladir, penciled by Dan DeCarlo, inked by Rudy Lapick, and lettered by Vincent DeCarlo. Sabrina breaks the fourth wall for her first appearance to speak directly to the reader, telling us all about her powers and the kind of person she is. It’s a fun little end cap that adds another layer to the book as a whole.

Buy it! For fans of horror comics, Afterlife with Archie, and Sabrina the Teenage Witch, Chilling Adventures of Sabrina #1 brings the heat. For casual or just curious readers, Aguirre-Sacasa and Hack tell an intriguing tale full of likable characters, great atmosphere, beautiful art, and a helluva lot of promise.