Story and Art by Daisuke Ashihara 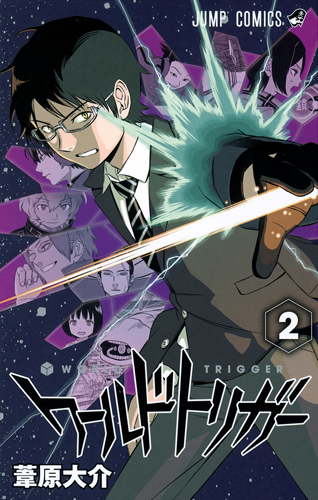 Black holes open up in the sky without warning. Giant monsters spill out, destroying everything in their path. A group of soldiers, the Border Defense Agency, rise above to protect the people of earth. In Daisuke Ashihara’s World Trigger, uncertainty is around the corner.

These creatures, dubbed Neighbors by the humans, are giant monsters set on killing humans for their own secret purposes. There are no obvious reasons for their appearance, no logic to their violence. It really is a testament to the competency of the Border than the citizens of Japan feel safe enough to carry on with their daily lives.

All that starts to change when a young man, Yuma Kuga, shows up in town. His slight, unassuming appearance is quite the opposite of his physical prowess. In a handful of pages, readers learn of his invulnerability, ruthless assertiveness, and violent manner of handling problems. Osamu Mikumo, a classmate in Kuga’s new school, gets mixed up in Kuga’s problems. When the two young men encountered a Neighbor, their identities are revealed: Osamu is a member of the Border, and Kuga is a Neighbor. The two must learn to work together to learn more about each other’s cultures and function in this war-like world.

The fighting in World Trigger operates on the use of Neighbor technology. The Border has dedicated itself to studying Neighbors in order to defeat them. Triggers are weapons that feed off of an internal power source – think of midi-chlorians in Star Wars. A person’s innate source of power is the primary factor in their success as a member of the Border. Osamu is your typical manga hero. His heart is in the right place, yet his own strength fails him time and time again. Ashihara is setting up Osamu for a power boost that will eventually meet his willpower. Osamu and his relationship with his Trigger will certainly be a point of interest for readers of this series.

While Osamu is set up to have a growth in his role as a member of the Boarder, Kuga is primed to gain some “humanity” and understanding of what it means to be a kind, emotional being. Kuga is not devoid of emotion; his relations to others are just…off. In regards to rules, Kuga muses, “But these guys haven’t been following the rules either. What am I supposed to do? ‘Rules exist to make the world go ‘round. They don’t exist to protect you.’ That’s what my dad used to say…In the end, it’s your own power that protects you.” Kuga’s deeper understanding of human culture will be another arc of growth to keep in mind while reading.

World Trigger is a buy for folks who love science fiction manga and anime. Even better, the first two volumes are now available in print from VIZ Media.