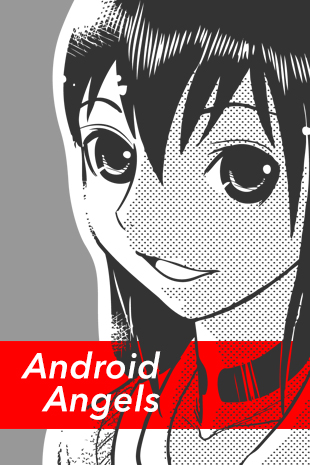 Kosuke Kabaya’s collection of short stories, Android Angels, provides a brief look at what makes us human. Set in the near future, Android Angels tells stories about humans and their interactions with androids. In this world, androids ownership is limited to four years. An android’s memory of their owner is wiped at the end of the term, and the android is passed onto the next owner. This unique rule sets up Kabaya’s tales of human connection, loneliness, and what it means to be an object.

If you’ve read Alex + Ada, the current comic book series from Image, you may already be familiar with the idea of androids as romantic partners. While androids are encouraged to have that role in Alex + Ada, the androids of Androids Angels do not have the primary function of providing love and sex for their human. However, the owners of the androids can’t help but feel that connection to their companion.

Kabaya’s rules in this world set up humans for despair. After spending four years with an android (who could essentially pass as a person), their memories are wiped and they are passed onto a new owner. In one story, a previous owner sees a former android companion. The android has no clue who he is, yet the human is clearly distraught that he cannot connect to the android. It is evident that androids in Kabaya’s world are meant to be objects for human use. The humans see otherwise.

Themes of loneliness are woven into the short story collection as well. In one story, humans contemplate what it might be like to have memories wiped at the end of a four-year term. The android, never knowing their past, must surely be a lonely being. The humans, however, come to the conclusion that it is far worse to know an android intimately. The android will eventually have no recollection of you or your time together.

The artwork is crisp and clean, matching the subject matter perfectly. The publication is oversized, which in turn makes the artwork really burst from the page. Android Angels is from GEN Manga, a company that specializes in indie manga publications.