Rat Queens #8 continues the tradition of quality storytelling that was established with issue #1 (released in September 2013, by Image Comics’s studio partner Shadowline). Kurtis J. Wiebe (writer), Roc Upchurch (art/colors), and Ed Brisson (letters) bring their talents together to prove that a fantasy comic book can be more than the typical quests of wizards and warriors. This issue stars dwarven warrior Violet, in flashback tale about family, tradition, and self-discovery. 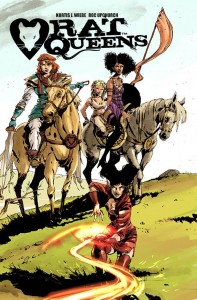 One of the strengths of the Rat Queens comic is how it tackles the personal issues all of us face throughout our lives. In 22 pages we see what life was like for Violet when she still lived at home, with her parents and brother – before she was a member of the Rat Queens mercenary group. Violet had a life forged in tradition. Each member of the household had a role to play, similar to the roles found in any patriarchal household. The men, especially the father, were in control. Violet was in pain because of this control. She did not want, nor felt she should, continue to live a life prescribed by tradition. She was a girl who wanted to make her mother and father happy, but in doing so, found herself miserable, false, and untrue to what guided her in life. All of her emotions about playing at being the person she’s expected to be, bubbled over when she meet a woman from another clan, who lived by her own rules, not those dictated to her by others.

The events in Rat Queens #8 start in Violet’s bedroom. Her beard is full, washed and groomed. She’s put on the latest armor from her father’s blacksmithing forge. It’s a special occasion. It’s the annual clan tournament and unveiling gala, hosted by Violet’s king-father. Violet is to model the new line of armor after the days’ spectacular battle-of-the-clans tournament, in which a member from eight neighboring clans participate in a battle royale ( including her brother). When Violet learns that the tournament is short one person, she volunteers to take the spot and fight. Her father flatly refuses based on hard rules, old tradition, and closed-mindedness regarding his daughter. Her brother is no help either.

At the tournament, Violet discovers one of the clan fighters, a substitute, is a beardless woman. Violet races to meet this person, who she almost immediately identifies with. She’s a woman — beardless, willing and ready to fight, without the expected clan symbols emblazoned on her armor. The effect of meeting this woman (Morgan of Clan Meldhammer), pushes Violet to not let anyone force her to be defined by cultural traditions and ideas, but instead to be the unique, self-created person she is.

Bucking tradition is never easy for those who take on the task. Almost everyone is against them — parents, siblings, extended family, “friends”, co-workers, the faceless masses of society, and the even the person behind the counter at the corner apothecary. Violet is crying to be herself and thankfully, she finds inspiration after meeting Morgan, a woman who not only defies tradition, but also defines herself.

Buy it. With Rat Queens, we’ve come to expect action, comedy, fantasy, and GREAT characters. Issue #8 is more about character development, but there is important action, and appropriate comedy to go along with it. Fall in love with Violet, all over again, with Rat Queens #8.