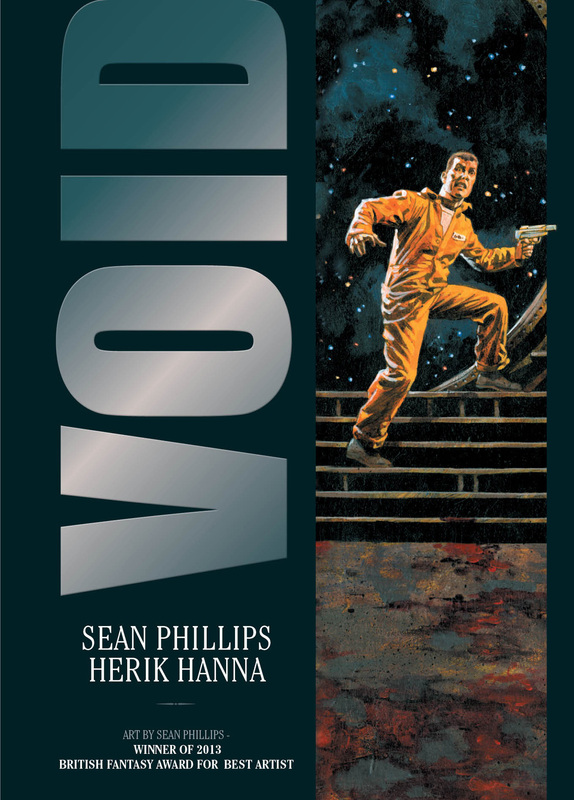 The one certainty is that this ship will be our grave. A giant stone that falls silently…ceaselessly…through the endless void…

Space as a vehicle for fear and certain death is nothing new. For decades, books, movies, and more have explored the horrors of isolation of space travel. From life forms beyond our earth to the infinite ways to die, space can be a major fear. In Void from Titan Comics, Herik Hanna and Sean Phillips reveal the madness that can only be obtained through space.

Darkness has descended upon Goliath 01. On its way to deliver inmates to a prison planet, Colonel Mercer breaks loose and commits slaughter on cargo and crew alike. Told through the eyes of John, an inmate, readers are given a strange secondhand account of the brutality of Colonel “No Mercy” Mercer. The source of his murder spree? The impending death of the crew and inmates, courtesy of tiny holes in the hull of the ship.

The threat of death is enough to send anyone over the edge. Men have gone mad over less than that. In Mercer’s case, the mixture of death and power proves a breeding ground that unleashes the most basal human response: kill or be killed. As John surveys the damage caused by Mercer, he slowly descends into madness as well. His hallucinations keep him from discerning reality from fiction, a problem that will plague him throughout the story.

Phillips is a master at images of horror. Just like his previous work, Phillips’ ability to make you ill and intrigued at the same time is a gift. One panel will show dismembered body parts, the next will feature a close-up of John as he contemplates the best way to avoid Mercer. Everything about this story, from the intricate images of the Goliath 01 to the flighty hallucination of John’s high school girlfriend, is absolutely gorgeous.

Void is a brief, wonderful read. The story takes a turn just when you have it all figured out, leaving you ready to read it again and again. Though short, Void is dense. There are a lot of elements to unpack within the story, which is a testament to the writing of Hanna and Phillips’ artwork. The story comes in a beautiful, large hardcover book.

Void is a buy, especially if you love dark, noir space horrors. The book is put-together very well, and the large size is perfect for admiring Phillips’ details. Due to nudity and graphic violence, this book is recommended for older readers.