Art and Adaptation by HeeEun Kim 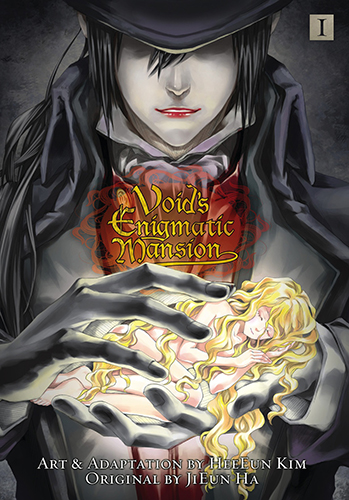 How long must he grant the wishes of others?

Until his own comes true.

In a strange mansion, residents are granted one wish. There are no exceptions, no restrictions, and no warning. The owner of the mansion, Mr. Void, primarily stays out of his tenants’ lives. Instead, readers see the way the tenants intertwine and react to one another.

The wish granter of the mansion is seen within the first few pages of the book. Mr. Lavelle runs into another tenant, Mr. Juist, who proclaims without a second thought, “I do wish the rain would simply stop, though.” As the rain immediately stops outside, Mr. Juist beams and bounces out the door. Little to his knowledge, Mr. Lavelle granted him his only wish.

The first volume of this Korean series has a very episodic feeling. Rather than follow a major storyline, the volume features brief glimpses into a few of the mansion tenants’ lives with the thread of an unknown wish being granted when they least expect it. This volume features the lives of Mr. Staff and Dante, two tenants facing troubles in their lives. Mr. Staff is a taxidermist working out of his apartment. Between the smell of his apartment and his unhealthy parlor, he lives the life of a recluse. When a mysterious nobleman brings a strange creature to be stuffed, Mr. Staff begins a descent into madness that will result in a wish that will undo him. Dante, on the other hand, lives the life of a starving artist. He struggles daily to make money off of his poetry, standing on the side of the road offering poems to young couples. When he meets a workingwoman of the name Ophelia, Dante reaffirms his dream of falling completely and utterly in love.

Void’s Enigmatic Mansion is a beautifully illustrated book. The beauty does not dull the horrors within the volume. Mr. Staff’s journey into darkness is particularly dismal; the contrast between the glowing artwork and the dark story leaves the reader squirming in their seat. Kim has struck a balance between the grisly and the gorgeous, which makes this series one you shouldn’t miss out on reading.

Void’s Enigmatic Mansion is available from Yen Press. The first volume is out in print. In addition to print copies, digital copies will be release simultaneously with Korea.

If you love creepy stories and amazing artwork, check out Void’s Enigmatic Mansion. By the end of the first volume, you’ll be sucked into the strange lives of the tenants and wonder just what Mr. Lavelle’s role is within the mansion.