Fabian Rangel Jr. recently launched his third (successful) comic book Kickstarter. This time around his project collects five previously published short horror comic stories, along with a brand new one, into a single 64+ page anthology. Fabian agreed to answer a few questions for me and talkingcomicbooks.com.

How long have you been writing comic books?

I’ve been writing comics since the start of 2010, and I self-published the first issue of my fist comic, EXTINCT (teens vs. werewolves) in October of that year. I consider October 2010 the start of my making comics career. So four years next month. 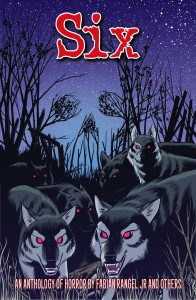 What kind of stories are you telling in SIX?

SIX is a collection of six (get it?) short horror stories in the style of Tales From The Crypt/Creepy/Eerie.

How’s the Kickstarter for SIX going?

It’s going great! We funded at the end of the first week and are still going strong. I’m blown away by the continued support from readers.

Where did the idea for this anthology come from? What made you want to put this project together now?

Mostly, it came from wanting to streamline my con table. Instead of having three or four books each with only one story from me in it, I wanted to have one book that collected all of the short horror stories I’ve contributed to various anthologies over the past couple of years. The timing just seemed perfect since Halloween is right around the corner.

How did you meet the artists you worked with on the stories in SIX?

With the exception of Jason Copland (Our Own Wars) who I met at ECCC 2011 and Cody Schibi (When The Evil Came) (a friend told me to check his stuff out at a con we were both tabling at) everyone else I met on Facebook or Twitter. Saw their stuff, dug it, and hit them up.

What do you love about self-publishing? Would you consider it a passion?

I like the immediacy of it, and being in control of when stuff comes out, how many copies I print, how much I sell them for. I’m not a very patient person, so self-publishing ensures I never get bored. And yeah, I’m very passionate about telling new stories and working with awesome artists as often as I can. I love making comics. But at the basic level, I self-publish because if I don’t, it won’t get released haha

Looking ahead, what are your go 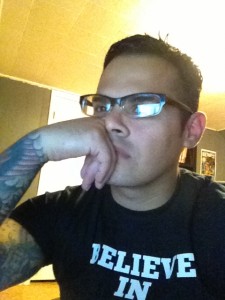 als in the comic book industry?

I look up to guys like Mignola and Kirkman. Guys that have made it doing exactly the books they want to do. They don’t (or won’t) go and work on some “Big 2” book for extra cash. They’re making a living telling the stories only they could tell. I’m not sure if that’s my dream because I don’t see myself ever quitting my day job, but I guess the answer is somewhere in-between. I want to write my own comics, and have enough of an audience to where I could actually make money for doing it, instead of going into a financial hole or going to Kickstarter.

Oh, man. Cons are great. One of my favorite moments was meeting Kevin Eastman at Staple (Austin) in 2012 and giving him a copy of Extinct, and him telling me to sign it for him. I couldn’t believe how down to earth this dude was considering how TMNT is a cultural phenomenon, and that I grew up on his creations. Now here I was giving him a comic I made, and he wanted it signed. Totally surreal.

What are some of your favorite horror movies, books, and comics?

Movies: American Werewolf, Lost Boys, Monster Squad, Bram Stoker’s Dracula, and The Devil’s Backbone.
Books: I like the books Mignola does with Christopher Golden.
Comics: Tales From The Crypt, Creepy, Eerie, the Mignolaverse books, The Goon.

What else are you working on?

I’m jumping back and forth between Doc Unknown Volume 3 (with Ryan Cody) and Space Riders (with Alexis Ziritt). I’m also working on a third comic that’s a secret that’s going to be huge when I finally get to talk about it.

How can people get in touch with you?

Any closing words for our audience?

Thanks for taking the time to read this! If you dig short horror stories, please check out the SIX Kickstarter. Also, drink coffee, eat pizza, read Kirby.