As soon as I finished Edge of Spider-Verse #3 I sat back and felt I needed to talk to someone about it. So I reached out to Rob, who’s a great friend to many of us here at the site, (follow him at @dusk1020) and picked his brain a bit about the book.  This was the first issue of Edge that I wasn’t completely taken with, so I wondered what his thoughts were. We were split on it.  My thoughts were that it’s a completely fine comic book, but for the first time I wasn’t taken with the character in the lead. 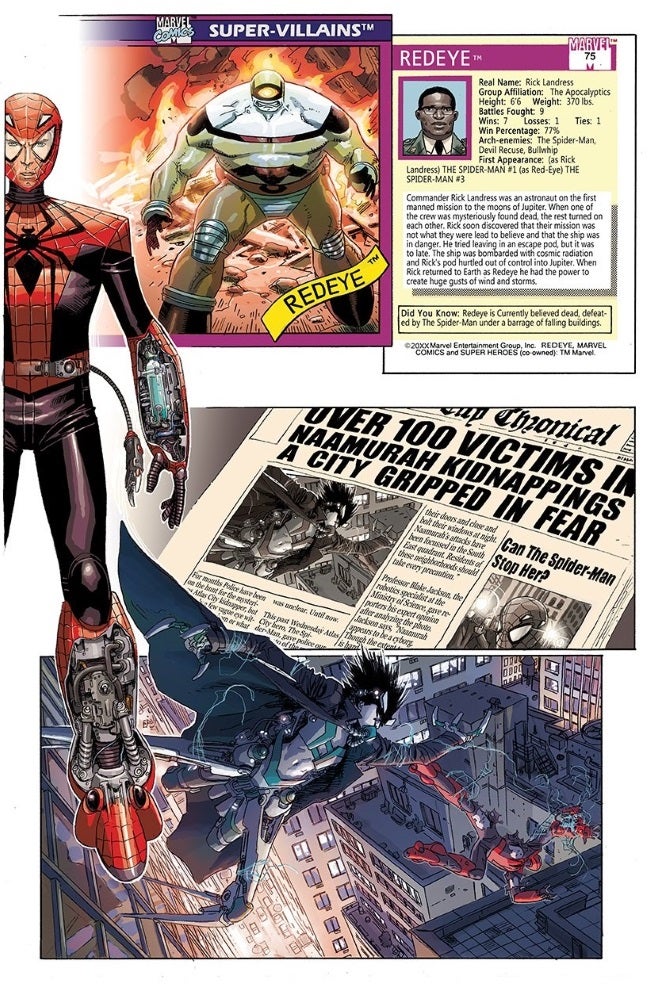 After reading about Noir Peter and Spider-Gwen, we’re introduced to Aaron Aikman, The Spider-Man. Initially this caught me off guard because I had assumed that all the Spider-Men would be tied to the characters we knew from the Spider-Man universe, and this character was completely new to me.  Dustin Weaver who writes and does the art for this book gives us a pretty unique version of Spider-Man.  This Spider-Man has an Iron Man twist and an awesome costume.  I found the story to be straight forward enough.  We’re introduced to the world and enemies of this Spider-Man, but I wasn’t taken in as much as I was before. I couldn’t find much of a connection to the hero and the plot. That was super frustrating to me, because while the ideas and hero of this world are interesting enough, I found myself going through the motions reading this and wondering when the connection to Spider-Verse would finally come.  When that moment did present itself, I’ll say that it did differ than the other books in that the ending isn’t as clear for this hero as the others Spider-heroes before it.

While Dustin Weaver’s story didn’t grab me too much, I did really enjoy his art. The costume like I mentioned before was drawn really well as was the expressive faces of Aaron. All of the Edge of Spider-Verse books have had fantastic art and this book continues that trend.  I can’t talk about this book without mentioning the absolutely awesome idea of introducing the villains of the world by making it look like you’re reading the back of one of the Marvel collectible cards from the 90’s.  Anyone who grew up loving comics from that era will be slapped hard by nostalgia.  I was and I loved it.

Pass on it.  After each of the first two issues of Edge of Spider-Verse, I wanted to see more of those worlds and characters.  This world serves its purpose as a one shot and isn’t something that you’ll really miss if you skip this issue.