If you’ve read through issue #3 of the series, then you need to pick this up. There are spoilers in the review.

There is only really one thing you can say about Armor Hunters #4 and the mini-series as a whole: It flipping rocks! Issue #3 was already one of the most awesome and solid issues released by Valiant this entire year, and all that “next-level” action continues to play out in this issue. 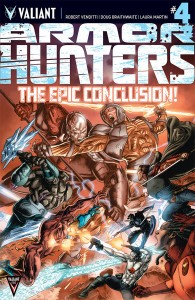 Venditti promised that we would see all of the heroes joining up on the battlefield to fight the hunters in the finale, and with the help of Braithwaite and Martin he delivered. I was expecting the hunters to be taken care of in the issue and they were. I was not expecting Ninjak to take out Helix or Bloodshot to take out Quartz (using Lilt’s poison gland sacs too). That is what I enjoyed the most about this series. We can have these notions and ideas that the heroes will survive, but what is surprising and entertaining is how all of the actions and events unfold. Just look at how awesome Livewire was in Armor Hunters #3.

In issue #4 we have the trope of a warrior pulling out a weapon they have been stabbed with to defeat their enemy. Let’s not try and pretend that the way Aric killed Reebo was an entirely original idea, but I honestly loved it. It fit perfectly in line with how Aric, as a character, would react in this situation, and was a fitting way for Reebo to go out.

Reebo was a warrior that had been on the hunt for a long time, and had grown tired. He had killed countless hosts infected by armors and felt a sense of duty to see his mission carried out until the end. Those he hunted may have started with noble intentions, but they had become slaves to the armors that infected them. In a similar parallel Reebo became a slave to his mission. His only escape was death.

Armor Hunters was a comic book event done right. These last two issues have been some of the most awesome and fun books Valiant has put out this year. If you are looking for a little bit of epilogue, then check out X-O Manowar #29 and find out Malgam’s fate.