The second title from Dark Horse’s massive relaunch of their Alien and Predator titles is Aliens: Fire and Stone, with the first issue scripted by Chris Roberson (iZombie, Edison Rex), art by Patric Reynolds (Let Me In: Crossroads, Exile to Babylon), colors by Dave Stewart (Fatale, the Massive, Conan), and letters by Nate Piekos (Colder, Veil, too many to list). 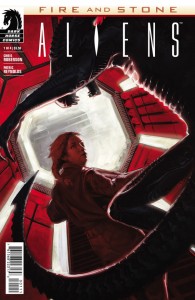 Aliens: Fire and Stone #1 ties directly into James Cameron’s 1986 action/sci-fi/horror film, Aliens, taking place during the Xenomorph (Aliens) attack on the Hadley’s Hope colony (on the moon LV-426). Fans of the movie will enjoy experiencing a piece of the story that was never a part of the film script. Readers jumping into the Alienverse for the first time will enjoy a thrilling story about teamwork and survival against all odds.

The Xenomorphs in Aliens: Fire and Stone #1 are like fast zombies; they’re brutal, relentless, and scary as hell. As they begin their attack on Hadley’s Hope, the members of the colony (at least the smart ones) realize there is very little room to run and hide. A group of 30 or so colonists and terraformers, lead by Senior Administrator Derrick Russell, board a short-range mining vessel with plans to escape LV-426, leaving the Aliens behind. They land on neighboring moon LV-226 only to discover it might not be the haven they thought it was.

As a standalone story, Aliens: Fire and Stone #1 works well. You’re only asked to remember three main characters, and they’re all distinct looking. There’s enough action to keep the pages turning, and enough character development to get an idea of who these people are. The story is simple, so far, and familiar, but that’s not a bad thing. Similarly to Prometheus: Fire and Stone #1, it’s apparent that the overarching story has been very well planned, all the fat has been trimmed, and there’s a definite direction these titles are taking. I have faith in the creative teams involved things will build quickly, culminating in something epic, for old and new fans of the Alien universe of stories and characters.

The art in Aliens: Fire and Stone #1, by Patric Reynolds, is well-fitted to the story. The Aliens are dynamic in motion and killing; their terror reflected in the faces of the humans, beautifully.  Colorist Dave Stewart uses a palette true to the original two movies, which helps give the book a feeling of despair and bleakness. The script, by Chris Roberson, reads well (thanks in part to letterer Nate Piekos), and keeps the story moving along with the action. By the end of issue, each of the main characters started to develop their own voice in my head (which can be hard to accomplish in a first issue with new characters).

Buy it – Aliens: Fire and Stone #1 (of 4) is a well-rounded comic book that will not only appeal to fans of the movies, but also to fans of survival fiction, horror, and quality comics.