Musings of a Missfit: EP 1

Welcome, boys and girls, to the latest little corner of Talking Comics that I’m claiming for my own: Musings of a Missfit. This is where I will answer all of your questions. Well, most of them. I may have to leave one or two out because some of you are just insane. I will do my best to answer as many as possible and I will be enlisting the help of all the amazing Talking Comics contributors to satisfy your every answery need. You can submit your queries to me in the TC forum, on twitter or to this email.  You can ask about anything and everything; you may get a super informative and helpful response or you may receive a goody bag of nonsense and snark from yours truly. All depends on what kind of mood I’m in and how much fun your question is! 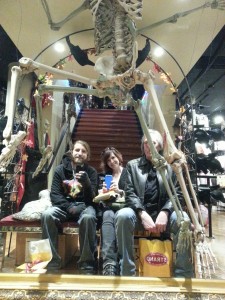 Me, Steve & Bob under the groin of a giant’s skeleton.

To start us off, I’ll tell you a little about myself. I’ve been a contributor here on Talking Comics for a couple years now, writing reviews and the Nature Vs. Nerdture column. I’m also a co-host of The Missfits, a particularly awesome podcast that you should be listening to. I’m a stylist and business manager, a mother and .a wife. When I can steal moments of free time here and there I’m either reading comics, playing video games or watching films and tv shows. I love scary things, fantasy and puzzles. Now, to the questions!

From our very own Bob Reyer: ” I know that you’re a great fan of horror tales of all sorts, and in all media, so here’s a “what if” kind of question. If you could pick five figures from the world of horror–real-life or fictional, alive or dead–be it books, films, TV, or comics, and invite them to a cocktail party for a wide-ranging discussion, who would be getting the invitations? Your Cranky Old Uncle Bob awaits the answer…and could I be a fly on the wall at the party?”

Dear Cranky Old Uncle Bob: I love you and your twisted, old mind. Obviously you love me too, because you gave me the gift of this super fun question. If I had a trophy to offer for the best question ever, I would bestow it upon you. My answer will never satisfy me, as every day that I try to answer it I want to add more names to the list, but I will give it my best shot.

1. Ed Gein. Real life killer, he has inspired the fictional stories of so many other great slashers it would be negligent to exclude him from my tea party. He murdered several local townsfolk and kept bits of their bodies as trophies. He may have a few tips and tricks to share with my #2 choice.

2. Pinhead from Hellraiser. This prickly fella is one of my all time favorite horror film characters; he’s smart, creative and has excellent timing. He’s a manipulator of flesh and has a wonderful demeanor for high brow conversation.

3. Hannibal Lecter. This one should be obvious. Lots of experience to talk about, well behaved and an indispensable resource for wine pairings.

4. Madder Red from Bedlam. A “reformed” serial killer with a soft heart, he would add a little extra zing to the gathering. I imagine he might also learn a thing or two from some of the more experienced attendants. Every party needs a loose cannon to avoid awkward silences and to jump in the pool with his bloody clothes on.

5. Cassie from Hack/Slash. This particular guest is more of a ‘clean up crew’. Tell her the party starts at least 2 hours later than the rest or things will come to a screeching halt too early on. I believe she would have her hands full with this crowd, but somebody’s got to clean up the mess.

From ‘wamphari’ (@liberalbastion) on the forums: “Why does DC (and marvel to a lesser extent) take so damned long to come out with their stuff in trades, hardcovers and omnibi (or whatever the plural of omnibus is). I mean how new 52 stuff is like barely to fourth hardcover.”

Answered from Talking Comics contributor and Missfit Mara Wood (@megamaramon): “For New52, I know it’s because they rebooted EVERYTHING in one month. Too expensive to publish hardcover trades of every single book during the months where they are due a trade. Instead, they diffuse the cost by spreading out the publication dates.” 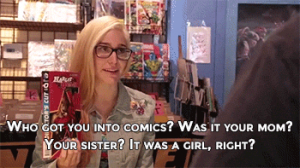 From  TC contributor Courtney Key (@Dachelle): “What do you think are the most effective ways to get new readers into comics?”

Dear Courtney: I absolutely love love love recommending titles to readers just delving in to comic book reading for the first time and I’m going to brag and say that I’ve been pretty good at it in terms of bringing them back for more. My approach is to ask what sort of subject matter, characters or materials they prefer in other areas of entertainment. Horror, fantasy, drama, mystery, action, etc. Then, choose a few comics that have a beginning and an end, since most new readers will not want to commit to a long running series of books that they need to pick up each week. Also, people who are more accustomed to reading novels or short stories will want to finish a story rather than reading through it in bits and pieces. Offer something that fits neatly in to their chosen genres of interest. Once they see that comic books really do utilize quality writing and can be about any topic they can imagine, they will be very curious to see what else is out there. Voila! You’ve created a new comic book reader!

From Carol Cross (@kinkycomicgirl) on Twitter: “do u have a preferred spot or attire when reading comics? I have my fave chair and i wear a tank top and my panties”

Dear Kinkycomicgirl: Ahem. 2 years ago, I would have been in the ‘tank top and panties’ club with you, Carol, but now I’m a mom. This doesn’t mean I don’t enjoy lounging in my naughties, it means I don’t do that anymore because then you’ve got a toddler yanking at your pricey lace panties and your tank tops are stained with something you can’t identify. My current favorite comic reading location and attire is usually in whatever corner of the house I can manage to escape from my family (sometimes in the car counts) and in whatever the hell I happen to have on my body at the moment. It’s all about survival for this comic reading mom. I’ll read my comics under the kitchen table wrapped in a Snuggie, if I’m reading comics then I’m in my happy place. 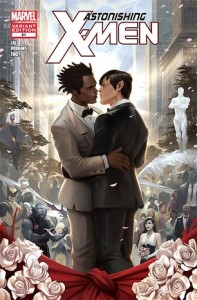 From ‘goodeeveening’ (@goodeeveening) on the forums: “There’s a lot of talk about how comic books are becoming more diverse, what with the push for female-led series, more LGBT and POC representation, the support of creators etc. Obviously there is a long way to go but things are certainly moving – slowly but surely – in that direction.
Do you think that this diversity in the medium is/will be trickling down into the community? Have you seen any signs of diversity acceptance in places that were previously resistant? What do you think members of the comic book community can do to help push this change in their usual spaces?”

Answered from Talking Games co-host Rob Neumeyer (@Dusk1020): “I am gay, I have been in comic retailing for over 10 years and frequenting comic stores/conventions since I was seven years old. I definitely think that diversity in the medium is trickling down into the community and it is a lot better then it has been but it has taken a lot of time.  Over the years I have heard my fair share of homophobic/racist remarks spoken in various comic related locations.  I was 14 when Northstar uttered the words “I am gay”.  I knew I was gay at that point but hadn’t told anyone. The day I bought that book is burned into my brain because it was the first time I had heard someone say the word fag with such hate, it scared the crap out of me.  “Be careful, there’s a fag in that book”. 19 years later Northstar would come into play again.  I had a customer who had read in the paper about the wedding of Northstar.  He nonchalantly walked into the store and said “Do you have that comic where those two fags get married?”  He thought he was being funny and would get a laugh from the crowd of people in the store.  I asked him to leave, but the other customers in the store were more vocal about the disgusting comment.  He tried to play it off once he saw that his “joke” hadn’t gone over too well.  Something like that wouldn’t have happened years ago.

There are many ways that people can help the community be more loving and accepting.  I feel that communication is the key to acceptance.  Strike up conversations with the people that frequent where you shop.  You already have something in common.  Maybe start a book club with some of the other customers.  It can be themed if you want.  I have seen plenty of LGBT/Women Comic Clubs formed over the years.  Ask your retailer because they might be too busy to do it themselves.  You’ll be helping everyone by strengthening the local comic community and maybe bringing new people into the store. Look into your local library too.  Sometimes they have clubs already formed.”

And on that note, I say thanks a ton to all of you who helped me get this new column started with excellent questions. I hope this was as much fun for all of you as it has been for me. My hope is for Musings of a Missfit to become a place where you not only get to know me better, but get to know all of the Talking Comics contributors better. Our community is full of intelligent, funny, interesting and kind hearted people; I want to hear from all of you! Please feel free to add your own answers to the featured questions on our forum or tweet me (@Lissapunch) your input, hearing from our readers (and listeners) is super duper exciting for me.