We’re all fans of comics. So much so, that many of us dream to cross over from consumer of comics to creator of comics. Like most dreams, that’s all they ever are. Part of the problem of turning dreams into reality is the question “where do I start?” That’s where how-to and instructional books come into play. 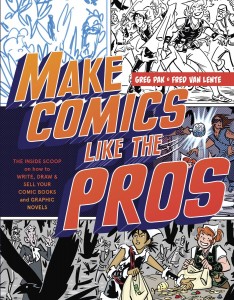 One of the latest how-to books on creating comics comes from comic book veterans Greg Pak (Action Comics, Batman/Superman, Turok: Dinosaur Hunter, Storm) and Fred Van Lente (Archer & Armstrong, Cowboys & Aliens, Marvel Zombies), titled Make Comics Like the Pros, published by Watson-Guptill (who also published the recently released Word for Pictures by Brian Michael Bendis). Make Comics Like the Pros provides a behind the scenes look at creating a comic book from concept to creation and publishing to marketing. After reading this book, you’ll have better insight into what it takes to create a comic and how to start the process.

Make Comics Like the Pros is a quick, fun, informative read that includes many tips, tricks, and real life examples. To help demonstrate the lessons, Pak and Van Lente include the step-by-step creation process of an original eight-page comic, titled Swordmaids, written by Pak and Van Lente and drawn by Colleen Coover (Bandette, Gingerbread Girl). In the second chapter, for example, titled Visual Storytelling for Artists & Related Tradespeople, we get a section showing all eight pages of roughs by Colleen Coover. In chapter four, Pitching Makes Perfect, we see the pitch document for Swordmaids. Including these sections in each chapter helps to maintain a sense of continuity and progression throughout the book.

Besides the depth added by the Swordmaids features, Make Comics Like the Pros has other helpful features in each chapter, such as a Creating a Comics Script Template in Microsoft Word, Formatting in Final Draft, a panel shot lists for artists, and a comic book Distribution Life Cycle table.

The meat of Make Comics Like the Pros deals with the high points of every aspect of modern comic book making (writing, penciling, inking, coloring, lettering, editing, publishing, printing, distributing, marketing), and while that might sound like a lot of information, it is all centered around what the main theme of the book is — collaboration. According to Pak and Van Lente, “the key to making comics like the pros – is collaboration…great comics come from true collaboration, with genuine give-and-take through which smart creators learn from their colleagues and end up with a far better final product than they ever could have produced on their own.”

Each lesson taught in Make Comics Like the Pros comes back to working and communicating with others. Van Lente and Pak stress that working as a team in all aspects of comic creating, from developing an idea, to executing it, to marketing the comic, is the key to success and longevity in the industry.

My favorite parts of Make Comics Like the Pros are the commandments lists. These easily digestible lists breakdown the very basics of what it takes to be successful at what you do and at working with a team. For example, one of the eight Commandments for Pitching is to “Have another pitch ready if the first one falls flat.” A second examples is from the Commandments for Inking, “Writers and artists, make your deadlines so that the inker doesn’t have to rush.” There are commandments for pencillers, inkers, colorists, letterers, editors, pitching, handling interviews, and collaborating (no commandments for writers though, weird).

If you’re looking motivation to get off your butt and get to work turning your dream of becoming a comic book creator and storyteller to life, then BUY IT!

Make Comics Like the Pros will not only get you excited to start creating, it will also help you figure out where to start and how to start in the strongest way possible.