Story and Art by Hirohiki Araki 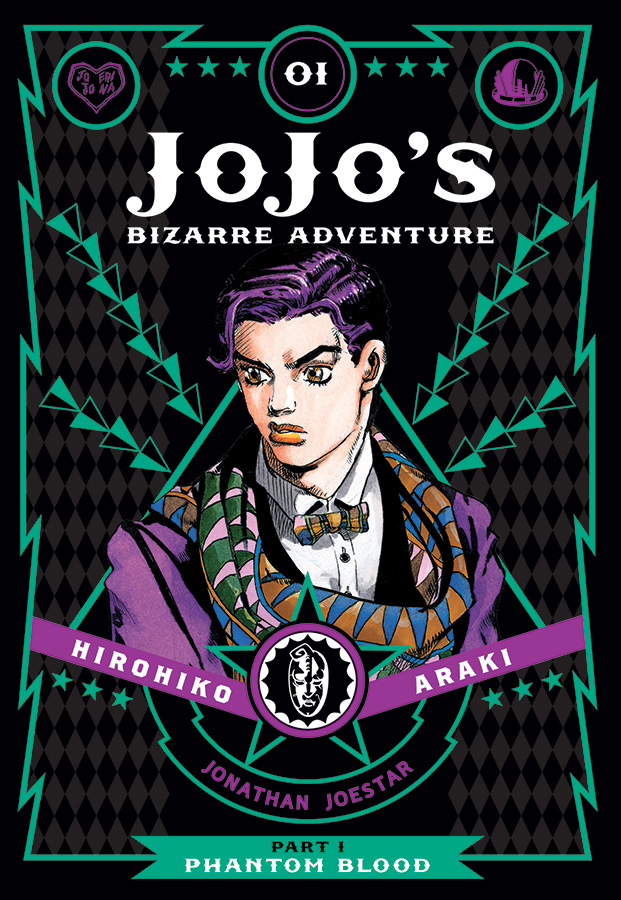 Hirohiki Araki’s multi-generational supernatural story JoJo’s Bizarre Adventure kicks off in JoJo’s Bizarre Adventure: Part 1 – Phantom Blood Volume 1. First published in 1986, VIZ Media has rereleased Part 1 – Phantom Blood Vol. 1 and has plans to release Part 2 – Battle Tendency as well as the rest of Part 1 on their digital platform. For fans, this is a great opportunity to see the beginning of the intense and long rivalry between Dio and the Joestar family in 1880.

Jonathan Joestar is the physically weak child of the wealthy Joestar family. Though his physique is lacking, his resolve is astounding. Jonathan, affectionately called JoJo by those who know him, fights for good in everything he does. Readers get their first glimpse of JoJo as he defends a young girl from ruffians. JoJo feels shame in his inability to protect those he loves, a feeling that he will carry throughout this volume.

Years ago, JoJo’s father was on the brink of death after his carriage fell off a cliff. A man, Dario Brando, attempted to steal the valuable items from the apparently deceased family. As he was about to make off with his killing, Joestar regained consciousness. In a blind moment of gratitude, Joestar promised to repay his debt to Brando for “saving” his life. Brando does what any awful human does and takes all he can get from Joestar – including sending his son Dio to live with the Joestars after he passes away.

From there, Araki works to establish an intense rivalry between JoJo and Dio, two young boys forced to becoming brothers. Joestar asks JoJo to treat Dio as his biological sibling, only to be met with recurring physical and emotional abuse. Dio sets out to be the alpha son in the Joestar family right from the beginning. His goal? To inherit the Joestar family fortune.

However, Dio’s hatred and abuse towards JoJo seems to run deeper than just money. Dio goes to great lengths to ensure that JoJo never becomes a threat to his position. He is, in a word, sadistic. It is not enough to inherit a fortune; in Dio’s mind, true happiness and joy can only come from completely and utterly destroying JoJo’s life. As noted in the volume, Dio’s evil nature is not something that can be created. He was born evil, a phrase that sets the audience up for believing that Dio can never be redeemed.

Redemption falls off the radar when Dio and JoJo discover an ancient Aztec artifact in the Joestar household. This artifact, a mask, holds the key to incredible power. The boys will hit a breaking point that will drive them to great lengths to protect what they hold most valuable.

JoJo’s Bizarre Adventure: Part 1 – Phantom Blood Vol. 1 relies on the audience’s compassion towards JoJo and their hatred towards Dio. It is easy to see how Dio is a foil to JoJo’s good nature. For a story that is supposed to span generations, this initial set-up is extremely important. Dio is seen as completely evil while JoJo embodies everything that is decent in the world. Small scenes throughout the manga, like the juxtaposition of JoJo meeting street thugs and Dio meeting street thugs, solidify the relationship Araki intends.

The first part of JoJo’s Bizarre Adventure was published nearly 20 years ago. As the creator states in his notes at the back of the volume, this was the era of muscles on the big screen. He cites Stallone and Schwarzenegger as popular figures of the time. Their influence can be seen all over this manga. Even as a weak boy, JoJo is still drawn as a thick-set and well-proportioned. There are no visible physical differences between JoJo and the stronger Dio. As they age in the volume, their musculature goes from feasible to outrageous. This is definitely the manga for you if you like stylized muscles and crazy physical combat.

This volume is available digital only at the moment. Though $10.99 may seem like a steep price, readers are getting 255 pages of content. The majority of the volume is in black-and-white, and a few pages are featured in color. If you are a fan of classic manga and are interested in how Araki makes this story play out over 100 years, buy it.