Story and Art by Hiromu Arakawa 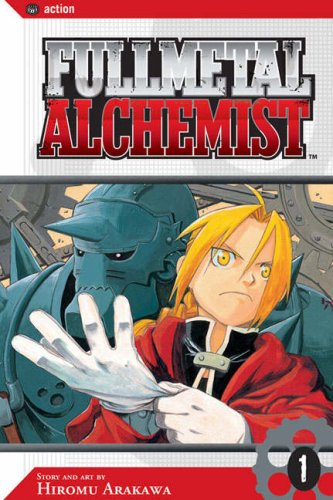 Buckle up everyone. We’re about to dive into one of my favorite manga and anime series, Fullmetal Alchemist. This series is widely acclaimed as an example of incredible storytelling and world building.

Fullmetal Alchemist is the proof that women can write fantastic action stories. Hiromu Arakawa, who often portrays herself as a cartoon cow within the margins of the manga, drops us into a world vastly different, yet strangely familiar. The two main characters, Edward and Alphonse Elric, are alchemists. Alchemists are able to create new objects from the objects around them. They obey two rules: The Law of Conservation of Mass and the Law of Natural Providence. In essence, you need something of equal value to create a new object.

Edward is a state alchemist, a military personnel who uses his alchemy for the government. He is also the youngest state alchemist, which speaks volumes about his talent and potential for his field of study. Edward is referred to as the Fullmetal Alchemist, primarily because of his automail arm and leg. His brother, Alphonse, is a suit of armor.

Which brings us to the main plot of this series. Edward and Alphonse committed the biggest alchemy sin ever: they tried to create a body using alchemy. In their defense, it was an attempt to bring back their mother. According to the principles of alchemy, nothing can be gained without giving something in return. Alphonse was taken in exchange for their attempt, and Edward sacrificed his arm to bring back Alphonse’s soul.

Immediately we see the love these two brothers have for each other. It’s deep, and the bond from their mutual sin has only taught them they must stick together. Edward makes several remarks about playing god, and his retelling of a story of the young man whose wings melted when he got too close to the sun reveals his thoughts on his actions. Arakawa has pulled no punches when it comes to the Elric brothers. Their overall motivation is now revealed: to find a way to get their original bodies back.

The journey to get their bodies back cannot be an easy one. Human transmutation is a taboo, and letting others know what they did carries stigma. The brothers travel far and wide looking for a power source to help them harness their alchemy. Their journey introduces us to the world of Amestris and the political machinations that could bring destruction to the world.

Scar, another alchemist, is a character through which we examine more of the inherent evils of alchemy. Alchemists, if they aren’t careful, play god. We’ve seen Edward and Alphonse suffer from their sins, and both of them constantly live with the realization that they cannot hide from their mistakes. Scar further questions the role of alchemists by stating, “The world was made perfect by God. Alchemists change the natural into the unnatural–twists things out of their true form. They sin by defacing God’s creation.” Arakawa let’s us know that the destruction and creation that is essential to alchemy has no easy boundaries.

Edward and Alphonse, being young alchemists, will undoubtedly be influenced by the alchemists they encounter, ranging from “dogs of the military” to people who aim to change the world with their gifts. Fullmetal Alchemist is a great series on responsibility, values, brotherhood, and loyalty.

A major theme running through Fullmetal Alchemist is the price of a life. In earlier volumes, the theme was touched on briefly through the attempted resurrection of the boys’ mother. The Philosopher’s Stone has a dark origin, one that brings up feelings of regret and hopelessness. Alphonse has trouble handling the truth of the Philosopher’s Stone. The Elric brothers must debate whether the benefit of regaining their original bodies outweighs the horrible price of the powerful Philosopher’s Stone.

Fullmetal Alchemist makes its readers think critically about the meaning of family and life. The Elric brothers only have each other in this world; despite a wonderful supporting cast, the brothers operate as if they can only fully trust each other. As a team, they have to figure out the next step in their journey: do they seek the Philosopher’s Stone and all that is attached to it, or accept their lot in life?