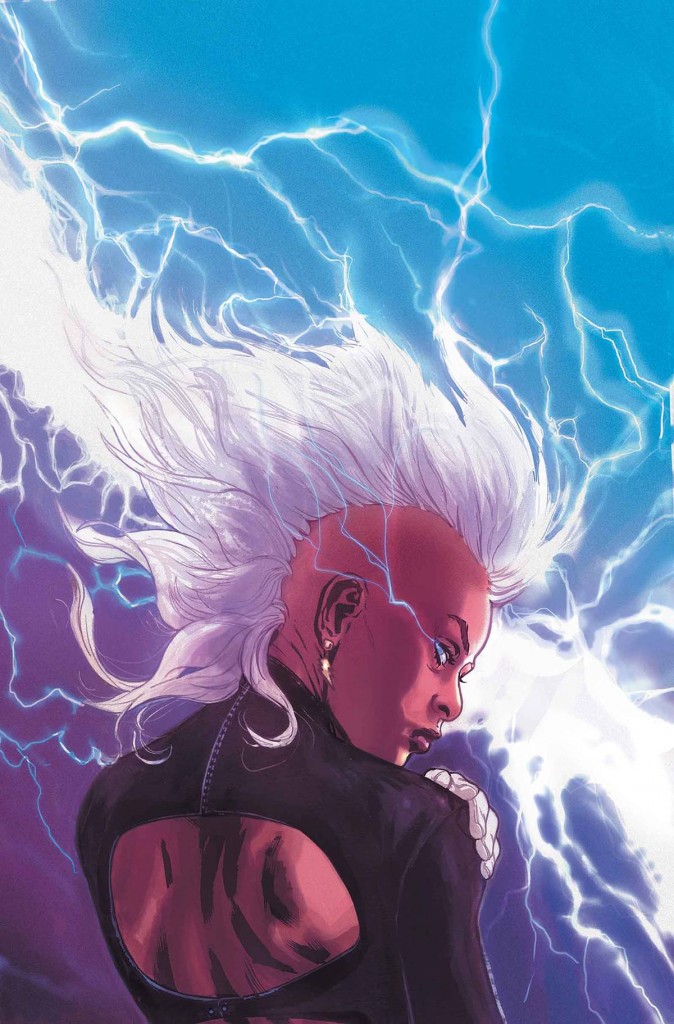 “I summon the full power of the storm!”

Continuing with our look at Marvel’s current female solo-title line-up, our next heroine is none other than the divine Storm. For some folks, Storm is best known for her over-the-top speeches that describe her powers in the 90s X-Men cartoon. While I get the reasoning behind it (obviously to hammer home that Storm is regal and elegant and whatnot), the cartoon missed some of the nuances of the character displayed in the comics.

In recent years, Marvel has realized the potential of the character in the current comic market. From a more prominent role as a teacher at the Jean Grey School to the leader of the main X-Men team, Storm is an integral part of the X-Men franchise.

The new series from Greg Pak and Victor Ibañez highlights what makes Storm an awesome character. In the first issue, Storm is shown in a variety of settings displaying the finesse she’s gained over the years. The Storm Pak is giving us is an older, wiser woman who has matured into one of the most powerful mutants in the world.

And she knows it.

One of the most remarkable traits Storm possesses is the confidence she’s gained over the years. Storm #1 shows us that confidence early on in the story – all the roles Ororo Munroe has held in her life have added to her ability to be the woman she is today. With Elektra we saw a woman who needed some time to figure out who she is; with Black Widow we saw a consummate professional; with Captain Marvel we saw a leader; with She-Hulk we saw a woman starting over; with Ms. Marvel we saw a young lady coming-of-age. With Storm, we see a woman possessing the allure and confidence only acquired with age.

Storm loves who she is. She loves her powers and people brought to her because of her gifts. In two short issues, readers are introduced to a Storm who is not only in control of her powers but also willing to let loose here and there. One theme tied to Storm for years is the idea of control. Storm would often cite that she needed to maintain complete control over her powers lest she kill everyone with renegade tornadoes. Not so anymore. She is rocking the Mohawk again and the subsequent badass attitude. It’s possible that her relationship with Wolverine could also be encouraging her more recent attitude.

The current Storm series has a lot of potential. Pak obviously cares about the character, enough to refer back to previous stories (such as her childhood in Cairo and the Morlocks) while keeping the stories fresh and emotional. No major storyline has emerged from these two issues yet, and I’m interested in seeing what multi-issue conflict will be in Storm’s life (we already know that she will be meeting with Yukio in #4-5). For now, I’m content reading up on this weather goddess.