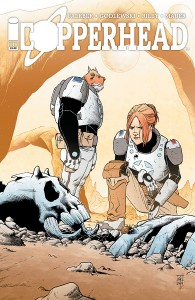 I’ve been on a bit of a western kick. I’ve watched 3:10 to Yuma, The Good, the Bad and the Ugly, Tombstones, No Country For Old Men (I consider it a western), and I’ve begun playing Red Dead Redemption for the first time, all within the last week. Then something irritating happened.

I gained a craving for something else, and yet, the same. I wanted a western, but not a normal one. I could watch Django Unchained, but I’d seen it before. I wanted something way out there that was better than Cowboys & Aliens.

I saw the title, Copperhead, and assumed it was a western. So, I looked it up to see if I would like to read it and possibly review it.  When I had read the premise for this story, I recalled a snippet of an idea I wrote a year ago. I found my idea document and searched for the word western and this is what I found:

Well, I still may someday, but I’m afraid that Copperhead has scratched the itch for that story for now.

When Copperhead opens up, it opens up in a fashion that isn’t so farfetched from the westerns that inspired it: on a train. Our protagonist, Sheriff Bronson (that’s with two f’s) and her son are traveling to their new town. Many western tropes can be handled on a train, especially when a woman is the protagonist. The writer does not hesitate in flipping one of the tropes around on its head. When a slimy man approaches her, a tall, dark and handsome man steps in to save the day. What follows does not hold to formula and it tells much of who Sheriff Bronson is.

Speaking of characters, this first issue almost exclusively deals with characters. Not much of the town is seen. There is a squabble, there is a possible crooked mine owner, and a hideous crime, but the action does not take a front seat to the character work. It actually compliments it. With each set piece and conflict teaching you a little more about a character. Who can be trusted, who can’t.

But much of the character work can be attributed to the art of Ron Riley, who draws Sheriff Bronson with such hardness in eyes, with a sharp jaw and furrowed eyebrows. She is a haunting beauty as she stares into this new start for her and her boy. Her son, Zeke, has the sense of wonder and curiosity of a kid about him, and contrary to that, the gravitas of a young man who has endured a lot. His resemblance to his mother without looking like a daughter is a masterwork by the artist. The alien characters are fun and colorful, both in physicality and personality.

Which brings us to the colors. The textured backgrounds and muted colors give weight to the seeming hopelessness theme crawling through the panels, which is answered by the moments of loveliness in the scenery. Just as the heroes of the story are looking for hope, so the setting can offer it. One must only know where to look.

Buy it. I usually trade wait when it comes to Image, and I may still with this, but for now, I’m picking this up. A western set in space is enough to keep me subscribed.