I always chuckle when comparing the present day to the dystopian nightmare of gloom that the books of my youth swore would be the state of the world post-2000.  (My heart sank when a dragon did not in fact bust out of Mt. Fuji at the turn of the century.)  But it seems to be ingrained within our psyche that the future, while scary in its own right, needs to be the bleakest thing we can conceive. Surely though, this is an environment in which someone like the Batman must excel though, right?  Well let’s find out as Ray Fawkes, Scott Snyder, and ACO thrust Batman into DC Comics’ darkest timeline with Batman: Futures End #1. 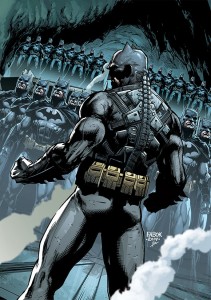 War-torn and ravaged physically, the years have not been kind to Bruce Wayne (so long as you ignore how spry he seemed in last week’s Detective Comics: Futures End #1) in his neverending battle against crime.  Seeing himself as more a symbol than a man these days though, he is more adamant than ever that the legacy of Batman must be maintained.  But how far is Batman willing to go to secure that lineage?  And can his shattered body even hold itself together long enough to see these goals to fruition?

Snyder and Fawkes seem to have an intriguing style when working together.  Both approach the story with a slew of moral ambiguities, and their work seems to feed off of each other in that direction for the benefit of this particular tale.  The story itself, rife with angles to explore from the viewpoint of the supporting cast as Bruce seeks to secure his legacy, focuses in on Batman and his relentless determination to do so with minimal recognition to those story choices.  It was a bold choice that I am sure had more to do with the one-shot nature of the story than anything, but between both writers they almost seemed to acknowledge each of these story avenues that were begging to be explored with just a curt nod.  That being said, the exploration of how Batman sees himself combined with the high-tech capering of a Luthor lab break-in made for more than an enjoyable story.  Easily stealing the show was the depiction of Superman’s arch-nemesis though.  Cold and calculating, yet so glib and secure in his superior intellect; it was a good week for the direction of Lex Luthor (combined with Superman Unchained #8) if this is the intended archetype they are guiding him towards. Overall, if the end goal was to leave the reader wanting more they succeeded with aces, as I would love to see how the final outcome of Bruce’s decisions would affect the Bat-Family at large.

The artwork from ACO also does an admirable job of capturing the despair, and outright torturous pain, of a Batman well beyond his physical prime attempting to relive his glory days for one final mission.  While I would have expected a little more concern from Alfred’s face during their conversation, who knows what could have occurred between these two in the 5 years missing.  Where ACO really stood out for me though, was in the joyful depictions of deathtrap after deathtrap within the Luthor compound.  Each one is fairly detailed in the panels, and it helps to add to the caper feel of the scene as Batman tries to figure out a way to counteract them along the way.

Check it out!  Not as big of a standout issue in comparison to others due to its high level nature, but it delivers a well-crafted and interesting story that will certainly get the old noggin churning on where any stories could go from this point.  And really, what more could you ask for from a one-shot?