With the two main characters off in The Delinquents, issue #24 of Archer & Armstrong is a one-shot issue revolving around the adopted sister of Obadiah Archer, Mary Maria Archer. The issue is one that is very different in tone to the rest of the series and that is due to Karl Bollers writing. 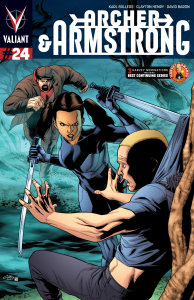 While Fred Van Lente wove in some heavy themes and intricate plot points, Archer & Armstrong always contained a fair amount of humor to lighten the mood. Karl Bollers takes a slightly different approach with a more serious exploration of Mary Maria’s backstory. She has appeared throughout the run of the series, but I feel as though we never got a real chance to get to know her until now. Her past is explored in great detail, and it provides a huge insight into some of the motivation behind the character. Bollers did a phenomenal job with fleshing out the character and hitting all the right beats. Mary Maria has always been a fairly sympathetic character at times, but the care and emotion that is added to her story in this issue seals the deal and creates a more developed characters I want to read in more stories.

Clayton Henry’s art serves as a bridge to the rest of the series. Henry has done a fair amount of work at Valiant and was on art duties back at the start of Archer & Armstrong. The detail in the faces of the characters captures not only the emotions of the characters, but adds a breadth that encompasses the entire story. The issue looks great and ties in with the art style we have seen in so many issues of the series. The awesome David Baron is on colors and he works it. The pages get that extra bit of pop needed to drill the emotion further into the reader.

I will say I was a little hesitant coming into the issue. However, I was pleasantly surprised by the rather amazing issue. There is a reason Karl Bollers was nominated for an Eisner this past year. (Hint: It’s because he’s a good writer.)

Buy It. Although the issue may lack some of the humor normally found in the series, it makes up for it by adding deeper emotional elements. The titular characters are not in this issue, but that does not take away the enjoyment of the readers. This could serve as a jump on point, but I feel like there are a lot of elements of the world that might leave new readers a little confused.