Manga Monday – Dawn of the Arcana

Story and Art by Rei Toma 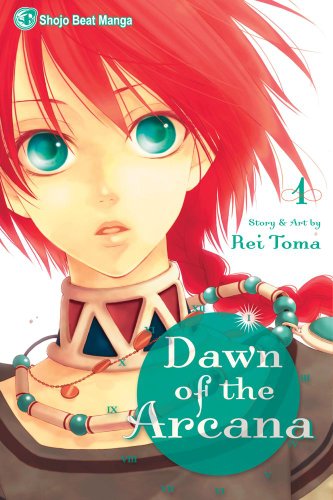 Not every shojo manga series starts out with a sweep-you-off-your-feet romance. Many series feature a heroine thrown into a situation with a man that she can hardly stand. One of those series is Dawn of the Arcana by Rei Toma. With a standoffish handsome prince, a devoted animal-like male servant, and a fierce heroine, Dawn of the Arcana is a fun and addictive series.

The series opens up with the announcement of the marriage of Princess Nakaba and Prince Caesar. This union signifies the steps toward peace on the small island in which the story is set. Nakaba comes from the poorer country, one inferior to the stronger country Caesar is destined to rule. Nakaba has a lot of strikes against her: Not only is she the princess of the lesser country, she is the illegitimate child of the queen and a redhead. In the world of Dawn of the Arcana, people born with hair other than black are considered a lower class. Nakaba was essentially thrown away by the royal family to fend for herself in the lions’ den. Oh, and she has some strange powers that allow her to see bits and pieces of the past, present, and future.

Caesar is the second son of a cruel and powerful king. His life is limited to what is expected of him in his role as prince. His marriage to a woman he doesn’t want to even look at is just one more duty on a long list of hoops to jump through to excel. As expected in any shojo series, the two must learn to function in their marriage.

One more wrench thrown into the mix: Loki, Nakaba’s servant. Along with red hair, people born with animal features (Ajin) are considered a slave class. With a large, oppressed class and two warring countries, Dawn of the Arcana has major political machinations working against Nakaba and Caesar.

Dawn of the Arcana recently ended with volume 13. The ending of the series is awesome, hitting all the emotional moments from the entire series. Toma did a fantastic job wrapping up the romantic story, leaving the readers satisfied. All thirteen volumes are currently available in North American markets from Shojo Beat.