I recently meet James Venhaus at a local comic convention here in Dallas and enjoyed a brief conversation with him. I took home the first issue of his Kickstarter-funded comic, The Night Owl Society (with art by Pius Bak, and letters by Marshall Dillon), and loved it. Below, James talks about the behind the scenes workings of his debut comic book, the Night Owl Society. 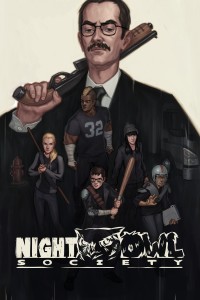 What’s the pitch for The Night Owl Society?

A group of five high school students are horrified when a friend is killed by a notorious mob boss and the police won’t do anything about it. They sneak out at night and try to disrupt the mob’s business without getting killed or grounded. It’s “The Breakfast Club” meets “The Sopranos”

What drives you to tell the Night Owl Society story? What/who sparked the idea?

I teach drama at a private school, and we talk a lot about ethics, and taking action to do the right thing in our daily lives. I thought about the incredible resources my students have (disposable income and lots of free time) and I thought, “What would happen if they took this idea to the extreme and decided to take action and fight crime in their community”?

What were your first steps in creating the comic? What kind of research did you do?

Working at a private school, I was able to do quite a bit of research by talking with my students. Then, I referred back to my favorite comics and tried to find out, from a storytelling perspective, what makes the great comics great? Although this is my first comic, I have written over a dozen theatrical plays that have been produced all over the country. So, writing the story was easy, writing for the comic genre was challenging, but ultimately, very rewarding.

How did you meet your artist, Pius Bak, and letterer, Marshall Dillon? What about their work attracted you?

I’ve never actually met either of them. I looked for artists on DeviantArt who drew sequential art well, and whose style I liked. Pius’ art is amazing, and I’ve enjoyed working with him. I did a Google search for letterers, and Marshall’s name came up. I liked his style, and he was available when I needed him. I’ve really enjoyed working with both of these very talented pros. 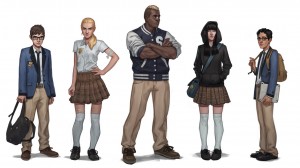 Your Night Owl Society Kickstarter was funded. What was the best part of running a Kickstarter? What would you do over?

The best thing about Kickstarter is that it brings in new readers. Over 50% of my Kickstarter backers found out about the project by going to Kickstarter and browsing through the comics projects. If I had a chance to do it again (and I may do it again with issue #2) I would rethink the pricing of some rewards. I’d try to bring down the price of the lowest tiers to attract more readers.

What did you learn about comic book fans from the Kickstarter campaign and the conventions you’ve been attending?

People love the book! I’m overjoyed with the reaction. At conventions, nine times out of ten, when people see the art and hear the pitch, they buy a book. I never thought it would catch on the way that it did. In fact, I’m sold out of the issue #1. I printed way more books than I thought I would need and at the Dallas Comic-Con Fan Appreciation Day, I sold out. People can still buy the digital version of issue #1 on Comixology, but the first printing of issue #1 is sold out! 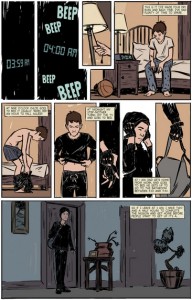 What has the feedback been like from fans, media, and professionals?

The reviews have been great so far. I’m thrilled that people have enjoyed the humor in the book. Writing humor in comics is much harder than in plays or movies. You have to order the panels for the best comic effect, which isn’t easy. I learned a lot about how to do comedy in comics from Calvin and Hobbes and Bloom County

What are some of your favorite comic books and/or characters? What comics or books are you currently reading?

I love Scott Snyder’s run on Batman. I think it may go down as one of the best Batman runs in history. As a kid, I love the Claremont/80’s X-Men and the Wolfman/Perez run on the Titans. Great stories, great art, and characters that seemed real and relatable..

What does the future hold for Night Owl Society and James Venhaus?

I’m hard at work on issue #2 right now. I’m trying to decide if I should continue to self-publish, accept an offer from a small publisher, or hold out for an offer from a bigger company. Stay tuned, the Night Owl Society, WILL return!