Story and Art by Natsumi Ando 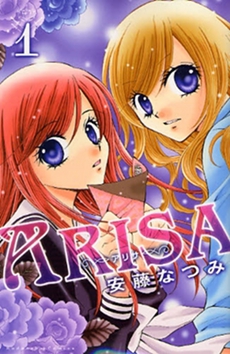 One of the best things about shojo manga is its flexibility in what is brings to the table for female readers. Yes, there is a thread of romance that ties this huge genre together. Whether its magical girls, fantasy, school dramas, or period pieces, romance traditionally plays a huge part in the story. That’s not the case for Arisa, a 12 volume mystery manga series by Natsumi Ando.

Arisa tells the story of twin girls Arisa and Tsubasa, sisters separated by divorce at a young age. The two promise to remain in contact via letters, and their relationship continues to flourish. Tsubasa is a screw-up, a girl who just can’t quite get it all together. She admires her sister Arisa, a student praised at her school and admired for her perfect life. When the two meet for the first time in three years, Tsubasa learns that Arisa’s letters barely scratch the surface of what’s going on in her life. Arisa, overcome by fear from a note left in her locker, falls out of a window in front of Tsubasa with the purpose of ending her life.

Though Arisa survives the fall, she’s not out of hot water yet. Tsubasa knows there’s something going on at school that is dangerous to Arisa, and she’s not about to let that force eventually kill her twin. Tsubasa decides to take Arisa’s place at school to find out who is threatening Arisa. What she finds instead is a secret club with an anonymous King that grants one wish of the students each week. It’s up to Tsubasa to find out who the King is and why he grants such violent and dangerous wishes.

As mentioned before, romance isn’t the main plot point in this series. Arisa has a boyfriend, but Tsubasa could care less about maintaining the relationship while she’s hunting down the killer King. Tsubasa also has a male friend from her real school who helps out, but he doesn’t put the moves on her. The bad boy in class looks as if he could be a romantic partner for Tsubasa, but she doesn’t trust him as far as she can throw him. What we get instead in a mystery manga where the heroine learns to rely on herself and what she knows about her precious sister.

Arisa is published by Del Ray and Kodansha comics. The series is primarily written for a teen girl audience, but can certainly be enjoyed by anyone. The art style is easy to follow, the plot is engaging, and the characters are interesting. All twelve volumes are available in North American markets.