Creator/Writer Robert Kirkman, artist Paul Azaceta, colorist Elizabeth Breitweiser, and letterer Rus Wooton continue their high level of quality and craft with the third issue of Image Comics/Skybound’s Outcast. Issue three is a transitional issue that sets up the next set of plotlines and story arcs, while also fleshing out the main characters introduced in issues one and two. The horror aspects of this series are downplayed in favor of character and story development. The central themes in Outcast #3 are loneliness and loss. The two main characters, Kyle and Reverend Anderson, explore these themes in stories independent of each other. 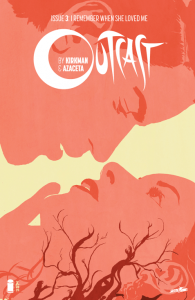 In his The Walking Dead comic series, author Robert Kirkman is known for causing his characters a lot of pain and loss. He appears to be continuing that tradition with Outcast…

We’ve all felt alone before. Some of us might feel alone right now. We will all feel alone at some point in our future. Being alone is a universal fear and feeling that’s all around us. I don’t want to stray too far from the review, but bear with me. The recent passing of Robin Williams cast a shadow over all of our lives. We can only imagine the weight of the loneliness he must have felt. So great was his pain that it caused pain in each of us. We lost a connection to another human being, and we all felt it. Some losses are big and affect a large group of people, like the passing of Robin Williams. Other losses are smaller and more personal. Some losses we hide from the world and some losses we bury deep within ourselves, rarely without negative repercussions.

Each character in Outcast #3 suffers from loss, or potential loss. Kyle, who’s been withdrawn from society, friends, and family has only just begun to heal. In past issues, he’s left his home, cleaned the house, and even started to reconnect with the people in his life. In this issue, Kyle joins a neighbor for a simple meal, and we learn a bit about how the loss of a loved one has affected them both. Will these two people, one suffering from regret, the other in mourning, develop a strong bond and lasting friendship? We also learn of a loss of Reverend Anderson’s. How does his loss play a part in his role as a messenger of God?

Throughout Outcast #3, Kirkman eloquently writes about his character’s losses (and their fears of loss) through warm character interactions, quiet/personal moments, and plain words. Azaceta’s pencils/inks and Breitweiser’s colors bring the quiet moments to life. Working together, Kirkman, Azaceta, and the rest of the team have created a well paced, emotional, and intriguing comic book.

Along with developing characters and their personal histories, issue three furthers the horror/supernatural story of the book, although slightly. Early in the book, a demon-possessed man brings tragedy to a new character’s life. The mysterious man in the brimmed hat from issue two returns as well (just in time to save the day for two characters). Who are these new people and what roles will play in helping Kyle and Reverend Anderson in their battle against evil? What joy and pain will they bring to our heroes?

Buy it – Outcast #3 deepens the principal cast of character, introduces a new major character, and continues to scare with it’s unique style of creepy supernatural horror!