In September the ‘Time Runs Out’ story that will crossover between both ‘Avengers’ and ‘New Avengers’ will begin. Taking Marvel’s superhero team eight months into the future, the conclusion of the story will see both titles come to an end and Jonathan Hickman leave the books.

The news was announced along with a book exchange programme, where retailers can exchange two copies of the upcoming ‘Avengers & X-Men Axis’ #1 for a single copy of Avengers #44, the title’s final issue.

‘Time Runs Out’ will be the culmination of a long running story stream where multiple parallel universes incur into the Marvel Universe. The situation will come to a head when we see The Avengers faced with the choice of destroying one of these parallel worlds to save their own. 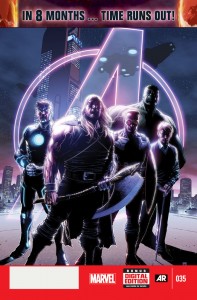 Although this story will take place eight months ahead of the other books in Marvel’s mainline universe, Marvel have confirmed that this story arc will see the whole line of titles impacted when they catch up. Marvel’s Executive Editor Tom Brevoort said “This isn’t some maybe-future, this is the real deal, what’s awaiting the Marvel Universe in the coming year.”

Speculation has begun that this could see another round of Marvel relaunching their titles at #1 and introducing some new titles. Although there has been no word from Marvel, new volumes for Avengers and New Avengers may be likely and with a number of titles starring Avengers team members starting in the coming months (Captain America #1, Superior Iron Man, Thor #1 and Mighty Avengers) it will be interesting to see what impact ‘Time Runs Out’ has on those titles, the Marvel Universe and the wider range of books.

What do think ‘Time Runs Out’ could mean for the future of the Marvel Universe? Tell us in the comments below!