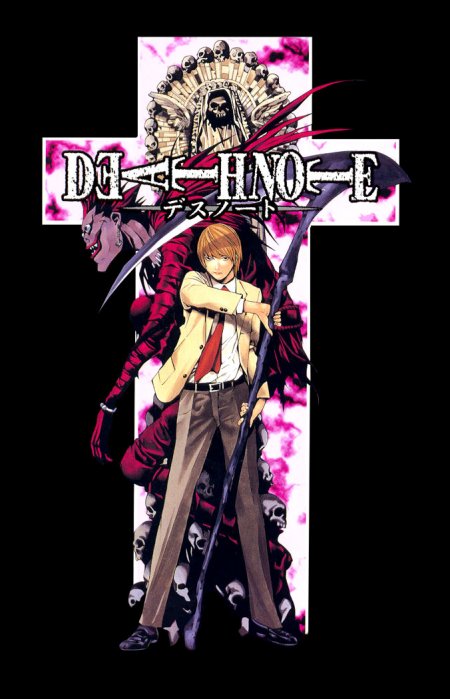 What would you do if you possessed the power to kill people by writing their names into a notebook? Tsugumi Ohba and Takeshi Obata’s Death Note explores this question through their main character, Light Yagami. Light, a brilliant (and probably narcissistic) high school student finds a strange notebook. As he reads the instructions written into the notebook, he learns that he is holding a Death Note, the tool shinigami use to take human lives. What quickly follows is a years-long quest to cleanse the world of evil and make way for a new society built upon Light’s own ideals.

Readers beware: Death Note is dense. Very dense. I don’t mean in terms of volumes. The main series spans a manageable 12 volumes. Its density comes from the subject matter. Light uses the Death Note to kill criminals. In doing so, he believes that he is shaping the world to behave a certain way or face death by an unseen savior. Light’s actions have been recognized by the public as those of Kira, a reference to the English word “killer”. This juxtaposition of who Light thinks he is (savior) and who the public initially believe he is (killer) is the root of the series.

Light is no saint, and readers of the series are attuned to that fact almost instantly. Obata’s artwork makes it easy to know what we should think of Light. There are moments when he is drawn as a normal young man. Our perception of him immediately shifts when Obata uses more shadow to create a sinister look across Light’s face. We know that the power of the Death Note is eating away at Light throughout the series.

Death Note is primarily written as a cat-and-mouse game. As Light uses the Death Note more and more, the Japanese police force is concerned with apprehending the murderer. With the use of extensive inner dialogue, Light predicts the movements of the police and eventually joins up with them. The leader of the initial investigation into Kira, L, is Light’s only match intellectually. The thought process of these two individuals shows just how high the stakes are for using the Death Note.

Death Note is addictive. Death Note will suck you in. Death Note will make you uncomfortable. Embrace it. Literature, no matter the medium, that forces you to think differently and challenge your own beliefs is rare. Death Note can be purchased in print, digitally through VIZ Manga and ComiXology, and is available in a fantastic anime series.