The Director of the upcoming Fantastic Four reboot, Josh Trank, took to Twitter yesterday to confirm that the recently leaked image of Ben Grimm/The Thing is, in fact, the real deal. He also went on to answer some questions that were sent his way in response to the image being shared.

In the improptu Q&A, Trank confirmed that the movie will not feature the ‘found footage’ style of his previous work, he said that the movie “Isn’t a Chronicle reboot or sequel. Same feel, maybe.” He also said to one follower that the change to Johnny and Sue Storm’s relationship was a “Minor change, they’re still siblings.”

He shared the leaked image on his account with the caption “Well, it’s out. There’s your first look at Ben.” Trank said that Jamie Bell wore a motion capture suit for the role and it was “One of the many reasons he was perfect for the role.” 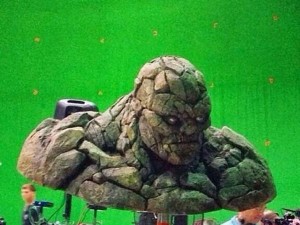 Of Tony Kebbel’s performance as Doctor Doom, Josh Trank teased that he “Scared the crap out of me.”

Trank was then asked if he could give a description of the suits we’ll be seeing in the movie. The response was vague and said “They’re not tight. I’ll tell you that.”

Fantastic Four hits cinemas on June 19 2015 and Josh Trank said we can expect a first look at the movie “late this year.”

So far, it’s fair to say that anytime news about this movie has been shared, it has been pretty divisive. Does this new information change your mind about direction of the reboot? Tell us in the comments below!