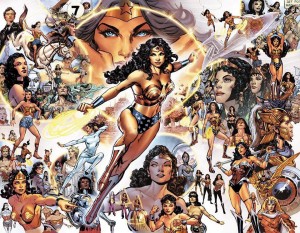 With the release this week of the print edition of the digital-first anthology series Sensation Comics #1,  the character of Wonder Woman returns to the pages of her “home book” for the first time since her series left the pages of the original Sensation Comics with its hundred-and-seventh issue back in 1952!  How does the Amazon Princess fare in this new adventure penned by her long-time scribe  Gail Simone? Read on and see whether Thomas Wolfe was correct in saying that “you can’t go home again”!

Ms. Simone first took up the reins on Wonder Woman back in 2008 with issue #13 of the third volume, crafting some of the finest tales told about Princess Diana in the post-Crisis era through to her taking leave of the title with #44, always imbuing the stories with the most positive attributes from the best work of the creators before her, yet simultaneously making it her own through the power of her formidable skills at characterization, drama, and dialogue, and whilst never losing the spirit of good humour and adventure. Ms. Simone’s first run on Wonder Woman would be a hard act to follow for anyone, let alone an author revisiting a previous triumph and inviting the inevitable comparisons, so before I get too far afield, let me say here for the record that this new Sensation Comics #1 is a glorious addition to the annals of Wonder Woman, and one of my favorite comics of the year to boot!

As our story opens (not-in-current-continuity, by the way) , Batman has been laid low by a coordinated attack by seemingly every member of his Rogue’s Gallery;  with Gotham City in chaos, Barbara Gordon, in her role as Oracle, has put out the call to Wonder Woman, the one person that she feels has the best chance to stem the tide and return the city to equilibrium, even as she thinks to herself that “Batman wouldn’t approve of this choice”! 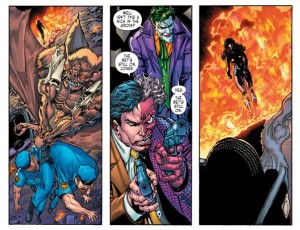 Diana has a much different approach that does Bruce, and it is through her efforts (both on the physical and psychological levels) to put things right that we are afforded the opportunity to see the strength of her character demonstrated in such a clear-cut manner as to make this issue a primer for those who claim that “Wonder Woman is hard to get a handle on”, or who state that it’s “impossible to write a symbol”! There are moments here by Ms. Simone that are breath-taking in their ability to speak directly to the historic core values of the iconic versions of this character, but in a way that never seems “preachy”.  Through Ms. Simone’s usage of  Diana’s visualized thoughts after she and the Amazons affect the rescue of some endangered children, her subsequent re-statement of purpose, and then her later handling of a cadre of rogues, the idea of Wonder Woman as a “warrior for peace’ is fully demonstrated within a mere handful of panels, perfectly encapsulating her creator’s intentions, as well as decades of respectful presentations of that philosophy.

If it seems I’ve been purposefully vague in my descriptions of the events in Sensation Comics #1, it is solely so that you as the reader can discover the glories of this tale for yourselves in the manner they were intended by an author whose previous work on the character of Wonder Woman stands as one of the high-water marks in the property’s long history. “Gothamazon” by Gail Simone serves to remind us of what an aspirational figure Wonder Woman can be, and brings into sharp relief those traits that we long-time fans of Princess Diana have yearned to see more of over the last few years.

As to the art on this issue, Ethan Van Sciver does mostly good work here, but I’ve avoided mentioning it until now so as to not detract from the positives contained in the writing. Being critical (what a surprise, right?), there are a few panels (and his cover!) that would have benefitted from a better “camera angle” so as to avoid some “pose-iness”, but on the whole, his Wonder Woman is a powerful character that despite her grim task battling the forces of evil still finds the time to comfort a concerned mother with a loving gesture and an understanding look.

There is a second story in this new Sensation Comics #1; entitled “Defender of Truth”, it was written by Amanda Diebert with art by Cat Staggs, and features a more current iteration of Wonder Woman, this time confronting the magiks of Circe. What could have been a rather pedestrian exercise was instead transformed into a little gem with a charming coda that will not fail to bring a smile!

VERDICT:  For anyone who loves Wonder Woman or the work of Gail Simone, as well as those of you who’ve found yourself in agreement with your Cranky Old Uncle Bob on the current state of all things “Amazonian”, this Sensation Comics #1 is a MUST BUY! For the more casual reader, there are two fine stories with a nice mixture of action, drama, and humour, but more importantly, there’s a chance to see the true heart of Wonder Woman presented in a way that might just make you a fan!