Here we are at the end of the fourth arc in Peter Panzerfaust. Tiger Lily and Julien’s stories have come to a close, and Peter sets off on a new mission. This arc had been one of my favorites so far in the series, and that is all due to the emotions found within it. 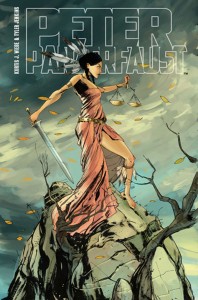 Last issue gave an interesting look into Tiger Lily’s thoughts of war and life, and it continues in issue #20. Even with the “surprise” final page, I did not feel that this issue delivered the same emotional punch we got in #19. Tiger Lily’s narration was only used in the latter half of the issue, while the first half focused more on the action and tactics of the battle at hand. The shift in tone and focus felt a little abrupt. However, I enjoyed the close of Julien and Tiger Lily’s story. While this issue did not carry the same impact as last issue, it still carries some heavy emotions.  I feel that over the past two issues Wiebe gave Tiger Lily some great opportunities to show how much she has evolved as character.

The art in this issue looks to have improved over some of the past issues. Jenkins seemed in form for most of the issue, but some of the final few pages looked a bit rushed, and lacked some of the polish found in earlier Peter Panzerfaust issues.

It is only because I am such a huge fan of the series that I pull out this fine tooth comb for a review. The series is still incredibly amazing, well written, and beautiful. As I mentioned at the top of the review this is probably my favorite arcs of the series, and it is well worth your money and time.

This is another solid entry into the Peter Panzerfaust mythos. The issue brings a nice ending to an emotional story arc. The action should be picking up as Peter heads after Haken. AHROOOOO!