Featuring an eclectic mix of art and writing styles, Dark Horse Presents #1 is 56 pages of short, fun, bizarre, and imaginative stories compiled into a $4.99 anthology. You don’t always know what you’re going to get in an anthology, but in the case of Dark Horse Presents #1, there are enough familiar faces involved to make an investment of your time, money, and imagination, very worthwhile. 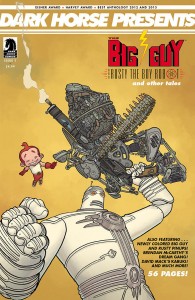 The cover and lead story feature The Big Guy and Rusty the Robot Boy, created in the mid-90’s by Frank Miller (Sin City, The Dark Knight Returns) and Geof Darrow (Hard Boiled, Shaolin Cowboy). Geof Darrow flies solo in this tale though, handling both the art and the writing. The intricacies in Darrow’s art are so fine that the story, while amusing, takes a back seat to the examination of each detail and every funny little joke placed in panel after panel.

Part monster story, part sci-fi, part social commentary, Darrow’s story serves as an excellent introduction to the personalities of the Big Guy and Rusty. The Big Guy shouts horrible one-liner after horrible one-liner as he bashes the monster and Rusty handles crowd control in the most ridiculous way. Speaking of crowd control, the real stars of this story are the nameless masses that wander the beach as the Big Guy and the monster brawl — too occupied with their cell phones, cigarettes, and garbage to be aware of, or concerned with, the immediate danger directly in front of them. There’s a lot of social and political commentary in these brief nine pages, and man is it fun.

Next up is another 90’s creation, Kabuki, in a story by David Mack titled “Kabuki: The Psy-Chic.” I was surprised how invested I became in this story given not only the short length but also the non-traditional “arts-craftsy-collagey” art style. Word balloons and narration look like they were cut from paper and glued to the page. Dreamy watercolors swim behind cut-out paper of varied textures to form figures, symbols, and even panel frames. It’s a very dreamy story that gives intriguing glimpses into Kabuki’s past while also giving us an idea of where her story goes from here.

Out of the six stories in Dark Horse Presents 31, I enjoyed the Kabuki and The Big Guy and Rusty the Boy Robot stories the most. The last four stories do have their charms, though. “Resident Alien: The Sam Hain Mystery Part One” (by Peter Hogan and Steve Parkhouse), for example, tells us the story of a clever alien with purple skin and pointy ears who needs to inconspicuously win a large sum of money. “Dream Gang” (by Brendan McCarthy with Nate Piekos of Blambot on letters) throws us into the trippy, cartoony dreams of an everyday modern man living the modern grind of life (sleep, commute, work, TV, repeat). In “Wrestling with Demons” (by Jimmy Palmiotti, Justin Gray, Andy Kuhn, John Rauch, and John J. Hill) a father/daughter road trip turns into a father’s worst nightmare when things go crazy in an old wild west ghost town. Lastly, “Sabertooth Swordsman: Colossal Casuals Crusades” (by Damon Gentry, Aaron Conley, and Joseph Bergin III) tells a short, exotic, adventure story starring a warrior tiger-man, illustrated in an animated, eye-popping style that seems influenced by classic 80’s video games and animation.

Buy it. Cover to cover, Dark Horse Presents #1 beautifully showcases the stories of unique characters and the talents of industry veterans, stars, and up-and-comers. If you enjoy engaging in thought-provoking storytelling methods and art styles without committing a lot of time, mental energy, or money, then Dark Horse Presents #1 is a must read.