Oooh Doggy! Delinquents #1 opens up in an incredibly cinematic way. It jumps right into a pre-title screen scene that seems like some minor event of the past. We are then immediately hit with a montage of scenes as the opening credits role before being brought to present day. 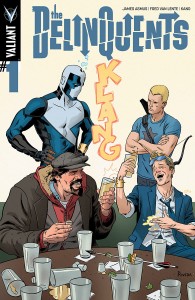 Delinquents stars two of Valiant’s comedic teams, Quantum & Woody and Archer & Armstrong. The entire concept of the mini-series is ridiculous, and that just lends itself even more to the fun, humor, and wit of the issue. It comes down to joining the two halves of a map drawn on old hobo ass-skin. It sounds wild, but in the capable hands of Asmus and Van Lente there is a certain kind of grace to everything. The involvement of the two teams does not feel forced. This first issue is only a setup, but it should lead to an interesting and entertaining first meeting.

The story introduces both groups to the events in ways that are natural for each party, and each is being dragged in for totally separate reasons. It is one of those rare issues of comics that doesn’t just hit the story beats, but hits them all in perfect stride. There are plenty of moments that had me laughing not just on the first reading, but on second and third readings as well. I’m looking forward to reading it again when it hits the shelves.

Kano does all of the art on this issue, and it fits perfectly with the story. It’s bright in colors, light in tone, and comical. I mentioned that had as cinematic feel, and that is all thanks to how Kano presents the issue. The layout in those opening pages sells that 80s and 90s action-comedy vibe. I almost feel a sense of nostalgia like I could be watching this on TBS on a Saturday afternoon. (This is incredibly high praise!)

Delinquents edge of the seat, hold onto your ass-map, excitement! Five Stars. A definite buy if you are tired of big blockbuster events. This is the summer’s fun comedy romp you’ll probably overlook, but years later when you finally pick up the DVD you’ll be wondering how you missed it.

Who would enjoy this?
Fans of Harley Quinn, All New-Doop, or Daredevil should find enjoyment in Delinquents. Of course if you are reading either Archer and Armstrong or Quantum and Woody.

This review was originally published on August 13, as an advance review.