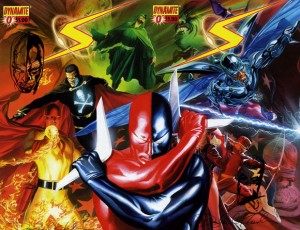 Oh, the call of the obscure.

In 2008 Dynamite brought together a team of disparate, Golden Age heroes whose one shared quality was that they were in the public domain. This was Project Superpowers. I had heard of these heroes. I had spent the wasted days of my youth pouring over the ridiculously amazing Steranko History of Comics and seen the pictures of that other Daredevil, the Black Terror, the Green Lama, and forty or so others. But to say I had any idea who these heroes were – their origins, their back stories, their back-back stories, and their back-back-back stories – would be to tell a lie. Imagine what it would be like to read Crisis on Infinite Earths or House of M without knowing the back-back-back story. What would that be like?

This may be a matter of temperament. I’ll admit that. I do love the Golden Age. And I revel in obscurity. And I get pretty giddy when I see a bundle on Comixology that features 36 issues, 800+ pages, a $39.99 price tag, and Alex Ross covers!

The setup of the story is as follows (all revealed in the zero issue, no spoilers here). Open up on the Fighting Yank, as an old man, being haunted by the American Spirit — a ghost wrapped in the American flag. This ghost tells him that the other ghost that Yank has been listening to all these years (his great grandfather, a hero of the American Revolution) has been leading him astray throughout his entire crime fighting career. Because of his great-grandfather’s bad guidance, the Fighting Yank has done a bad, bad thing and must somehow undo it. 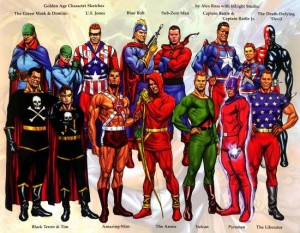 Flashbacks ensue. World War Two. The assembled heroes of our story plan action in Europe. An army general pulls Yank aside and lets him know that Hitler has found an artifact that may be the source of all evil, Pandora’s Box! Somehow the general and his proto-CIA cronies have figured out that it just might be possible to draw all of the evil in the world back into the box and shut the lid. Unfortunately – if you remember the story – it wasn’t only evil that came out of Pandora’s Box, but also hope. Yank will also have to trap hope in the box if the plan is to work. Who is the embodiment of hope in the world? Superheros! Yank spends the next fifteen years trapping nearly all of his costumed comrades in the box, where they stay until the present day.

Evil is not banished, of course. Yank had been fed a load of horse hockey. The world has become a corrupt, unnatural, fascistic dystopia, and it’s Yank’s fault for removing hope from the world. The ghostly American Spirit tells Yank he’s got to make it right. Open the box! Which he does. And that’s where this behemoth of a story begins. (Hint: Yank’s friends are really pissed off!)

How does it go? 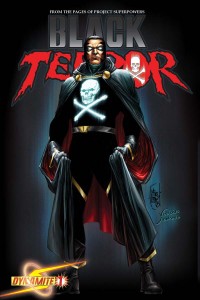 Between the two Project Superpowers miniseries and the Black Terror series and the Death-Defying Devil miniseries there are about twenty heroes featured as “regulars.” These include the three mentioned above, but also Mr. Face, Masquerade, Hydro, Pyroman (whose power is … electricity?), the Target, the Arrow, the Flame, etc. There’s also a subgroup of sidekicks, called the Inheritors, who are manipulated into opposing Team Superpowers. Finally, you’ve got your Villainous Conspiratorial Organizationtm, and a few more heroes who they have recruited to their cause. In the end, it’s a cast of dozens, and that can get to be a challenge.

But the writing is strong. The story is heavily plot driven (as opposed to character driven), jumps are clear, and the pace of it is very engaging. There is a good amount of philosophical “deep talk” about what America has become in the 60 years the heroes were trapped, justifying the drastic moves of Our Heroes. On the whole, though, it’s a genuine action story that doesn’t ever stop. It’s easy and enjoyable to let your self be taken by the flow of it all, trust the story, and not worry so much about all the details. (“Oh, there’s a guy with a skeleton head and a skeleton plane, I don’t remember seeing him before. Okay.”) Alex Ross, aside from those covers, co-plotted the whole set, allowing for a consistent vision.

Similarly, the art is also strong throughout, though any line art would pale next to those wonderful covers. This kind of story demands an uncluttered, energetic, and clear art style. Sadowski, Salazar, and Lilly all provide that. The rhythm, tone, and palette suit the story, and Ross’s designs are a joy to look at. It’s a nice balance between a somewhat dark tale, well-drawn, and the sort of colorful amazement that is one of the defining traits of the Golden Age. Project Superpowers is not an exercise in deconstruction.

The two spin-off series – The Black Terror and The Death-Defying ‘Devil – do focus on the two most interesting characters of the horde. One of the more baffling choices made by Ross and the plotters is to have the ‘Devil be mute throughout. Characters remark on this. Is it PTSD from the 60 years in the box? What’s going on? It turns out that the reason for this is (no spoilers!) extremely relevant to the plot and very cool. But, the cost of this plot point is to take the voice away from your most intriguing character. It pays off in the ‘Devil miniseries – a great set of four issues that fills the character in and raises great questions that go on to be addressed back in Project Superpowers Vol. 2. (The ‘Devil miniseries also finally drops the other shoe on Chekhov’s Spiked Belttm!)

As I reread the set a second time, I realized how important it was to read the set in the correct order (okay, file under: obvious). The first time through, I did get lost at one point, possibly due to my own obtuseness. But I do feel like Comixology’s bundle sent me to the wrong “next issue” once or twice. Thus, I encountered the Ghost (skeleton-plane guy) in Project Superpowers before he was introduced in the ‘Devil miniseries.  A minor quibble, but important with a set this big. Also, Dynamite has spun off a number of miniseries from this, including one on the Owl, one on Masquerade, one about the bad guys,both members of this happy Superpowers team. Why aren’t they included, Comixology? Makes me want to go, “Grrr.” (Just before I click on “buy this book” to purchase those miniseries!)

The series hits an awesome sweet spot for me in terms of historicity, storytelling, art, and SHEER MASS (I’m one of those cheap comic readers). Ross’s vision is the perfect balance between a Roy Thomas style pastiche (see the original Invaders series) and the dark grittification that so intrigues moderns. Exciting, immersive, and – dare I say it? – charming.

Books mentioned in this column: