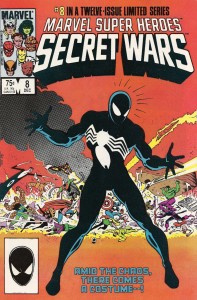 The current host of the symbiote is Flash Thompson, who after losing his legs in the Iraq war agreed to be host for the military in Amazing Spider-Man #654. Thompson was given the name Agent Venom, he joined Secret Avengers and was later recruited to The Thunderbolts. He joined the Guardians of the Galaxy after the Avengers sent him as an envoy to help maintain a relationship between the two teams.

The story came about when Bendis emailed Tom Brevoort and asked “Am I nuts, or have we not seen the planet that the symbiotes came from? Did I miss that in the ’90s?” Bendis goes on to say “low and behold we had seen a planet taken over by symbiotes, but we had not seen their home planet. So right there I knew I had to get Venom on the team. I was ready to go! I’m doing the “Alien” trilogy! I had a story, and it was a new adventure for the Guardians as well.

So all of that was really exciting, and something I brought to a retreat about a year ago. I was sad that Venom’s book was going away, but that also made him available for this story. So that was great and we were off and running.

When we announced that Venom would be joining the team with our Free Comic Book Day issue many readers asked me, “Why is he on the team?” And I would say, “Planet of the Symbiotes!” And then they were like, “Oh, OK!” That immediate rationalizes any doubt you have about having him on a cosmic book, and it’s great because Flash is military, and as a recovering bully he fits in with characters like Gamora and Drax who are recovering from a past life of violence that they may regret now.

So he fits in on that level, but at the same time even though he’s had adventures with the Avengers and adventures that are off planet he’s still a, “Wow! Look where I am!” character. So there’s a lot there and we saw in the last story line that the minute he gets off planet people know what the symbiotes are. They have a value and people are being hush-hush about them. There’s a different relationship to them in the galaxy than there is on Earth. So already Flash is freaked out.”

The lead-up to the story begins this month in Guardians of the Galaxy issues #18-#20 with an ‘Original Sin’ tie-in, with art by Ed McGuinness, which will solve the mystery of what happened to Star Lord when he was trapped in the Cancerverse with Thanos and Richard Rider of the Nova Corps. ‘Planet of the Symbiotes’ will then follow from Guardians of the Galaxy #21 in November.