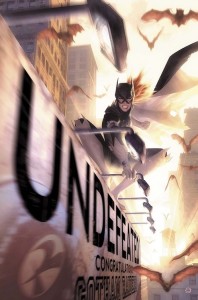 Although there remains one more issue of this title that will still bear the name of  Gail Simone as writer (next month’s “Five Years Later” Future’s End tie-in), Batgirl #34 marks what I believe to be the culmination of her tenure as the chronicler of the life of Barbara Gordon, begun back in 2003 with the fifty-sixth issue of Birds of Prey.  Ms. Simone left with issue #108, (although she filled in on #116) before returning for the first thirteen issues of the fifteen that comprised the 2010 re-launch of that series. When the “New 52” took over continuity in September of 2011, Ms. Simone picked up the reins on this new iteration of Batgirl, here just recovered from the paralysis visited upon her due to the attack by The Joker. Thanks to Ms. Simone’s insightful work, we’ve watched as Barbara fought her way through her own self-doubt about being a hero, bouts of PTSD and “survivor’s guilt”, an assortment of super-villains both old and new, as well as navigating some intriguing inter-personal relationships with family and supporting characters…not to mention the dread spectre of innumerable cross-overs! What sort of bow does Ms. Gail Simone use to tie-up the loose ends in this issue? I won’t spoil any of the things that either brought me up short or caused me to smile broadly, but let’s just say that this was one special comic book!

Picking up from the thrilling climax of #33, Batgirl is faced with having to overcome the violently anti-crime machinations of  Charise Carnes (aka Knightfall) and her army of meta-mercenaries, and even with the aid of her new partners, Black Canary and The Huntress (this time around it’s Helena Wayne of Earth-2), 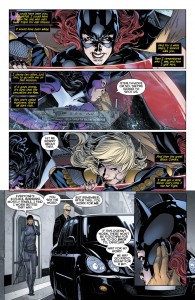 it seems a daunting task. However, Barbara has grown more self-assured during her time back “in harness”, and adding that confidence to her already formidable skills as a crime-fighter (and with computers…a hint of the “Oracle-to-be”?), she may just have a puncher’s chance, even against some very long odds!

I’ll not go into any more detail, except to say that Gail Simone’s story is absolutely thrilling and action-packed, with call-backs to issues throughout this run…and some others, so keep a sharp look-out! At the same moment, it’s filled with her trade-mark humanity and more of the exquisite character moments that were the highlight of this series, as even when Ms. Simone was placing Batgirl into some dire straits, we as readers were always made aware of how gallantly Barbara was struggling against both her own short-comings and those imposed by outside circumstance, and in so doing, revealed to us a true “super-hero”.

VERDICT: If you’re at all a fan of the Caped “Crusaderix” or the “old” Birds of Prey, Batgirl #34 is a must buy! As one who has probably read all of Gail Simone’s work portraying the character of Barbara Gordon, issue #34 of Batgirl writes a satisfying “finis” to this chapter in the Dominoed Daredoll’s life, and one that brings into sharp focus the masterful job that Ms. Simone did in keeping the character of Barbara Gordon true to the values she displayed during the Birds of Prey that made her so beloved, all whilst still keeping to the dictates of this new continuity. As I have the floor, so to speak, I’d love, both for myself and for all the others who have taken this journey with Barbara, to extend our heartfelt thanks to Ms. Gail Simone for an amazing ride! 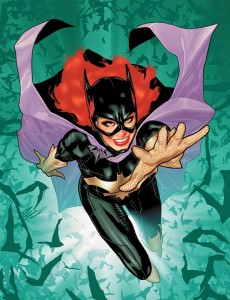 Addendum: I was fortunate enough to have the chance to interview Gail Simone during this Summer’s NYCC: Special Edition show, and our episode that contains it can be found at the address below: