When I picked up this book and started reading I had Europe’s “Final Countdown” running through me head. Harbinger: Omegas is the setting up to cap off the events that Dysart has been building towards in the previouse twenty-five issues of Harbinges. We should be seeing some sort of final showdown between Peter and Harada, Harada and the World, or maybe even Peter, Harada, and the World. 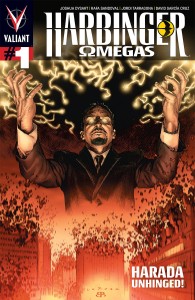 While not my favorite issue in the Harbinger line of stories, I did really enjoy it. The book was split between what Harada and Peter are up to since issue #25 of Harbinger. The pages focused on Harada were very engaging both in art and story. Events were genuinely interesting, and brought a “holy s**t this guy is for real” line of thinking as I read.

The pages with Peter did not do much for me. It feels like something we have seen before and a regression in the growth he had made as a character. Peter doesn’t do much, and it can leave one wondering how he is going to fit in with the rest of the story and how this is going to fit in three issues. However, all the crazy with Harada makes the issue worth picking up.

The art was pretty damn good in this issue as well. Sandoval’s style seems to shift slightly when switching between the two characters. I actually thought there were two artist on the book. I really like Tarragona’s inks and the thicker black outlines. Coupled with Cruz’s colors there is an almost animated feel to the issue. The colors are incredibly vibrant and the black lines just make everything pop off the page. The art, from pencils to inks to colors, was probably my favorite thing about the entire issue. There is one fantastic page that I wish I had the money to but the original art.

A solid read for veteran readers of Harbinger. It is not incredibly new reader friendly. Previous events and knowledge of the characters adds a depth to the story that new readers might miss.