Say what you will about DC’s New 52 initiative, but they certainly did try some less-than-safe titles in their efforts to find new avenues during their rebranding.  None though has had such a wild ride of reinvention and tonal shifts during its tenure as the title of Batwing (coming to its natural close this week with issue 34).  Marked by location changes, dramatical mood swings, and even the replacement of the lead character, it has been nothing less than an interesting case to see how much effort has been put into finding the right blend to make a Batwing title work. 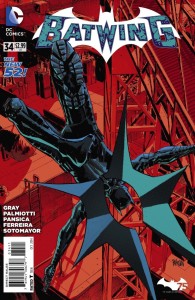 Launching out of the fairly whimsical (in comparison) Batman Incorporated storyline, his solo title found a newly-minted Batwing as the representative of Africa within the Incorporated structure.  With a sordid tale of conscripted child soldiers, governmental apathy, and how even those with the noblest of intentions can be worn down by their environment, its opening arcs were in a word; heavy.  But that all changed around issue 19, as a new character took on the mantle of Batwing and proceeded to go on jet-setting adventures with the off-kilter style of his Batman Incorporated roots.  As sales continued to dip even during these fun mad romps, he was relocated to Gotham, where our story took another turn for the dark as his family began to pay the price for his heroics.  This leads us to our current and final issue of his run, which after such a tumultuous ride is surprisingly quiet, graceful, and simple in its exit.

Luke, clinging to keep his family together after recent events, takes his sister out for a day-trip into downtown Gotham.  But even after it provides a day of fun and strengthens their bond, Gotham can quickly turn on the unwary.  So it is that Batwing finds himself back in the saddle once more.  Can he find the drive to continue this role after all it has taken from him?  And is there such a thing as a happy ending for a resident of Gotham City?

For such a wildly erratic run, I have enjoyed quite a few different aspects that Batwing has brought to DC’s table over the last few years, and this issue is no different.  The trials faced by the Fox family has been heart-wrenchingly realized over the 14 issues that they have taken center stage, and it is given aspects of closure in this finale that in some ways make it more painful even as it is tinged with hope.  The conversations with his kid sister are detailed with as much affection as it is attention and really bring the family dynamic to the forefront, even as the stark interactions between his parents act as the contrast.

Artistically, Pansica does a great job at bringing the differing tones into a single relatable chapter via subtle stylistic changes in each scene.  With clean yet detailed panels during the day, the style shifts to a darker tone once Batwing enters the scene.   This helps to add some urgency to his mission, and by acknowledging the shifts in tone creates a smoother transition between the scenes than if all were played the same.  With conversations taking up the bulk of the issue though, it is his focus on emotion that drives the visual aspect of the story to great effect.

Pass with caveats.  ‘But Sean, you just said all those wonderful things?’  And I stand by them.  As a chapter in an ongoing it was wonderfully done; just not as the last chapter.  My main draw has been the personal story of Luke as he dove into this life of insanity without thinking about the consequences, and in that arena, this finale feels a bit too simple for the larger questions it was raising within his life.  It’s an unfortunate result of the sudden cancellation, but one that has to be taken into account when reviewing the whole.

Although all of the risks didn’t pan out optimally, I still have to give kudos to the willingness of the creative teams to take risks inside its pages, as well as DC for allowing its pages to exist for this long.