Fifth Week.  That magical time every few months when we get an extra Wednesday of comics goodness.  To me, it is the equivalent of finding a $20 bill inside a winter coat pocket the following fall.  Why, you ask?  It’s one of the few times that my weekly budget is given a bit of freedom to explore out into the wilds of comics that lay outside of my standard pulls.  So in that spirit, today we are going to look at the new offering from Vertigo entitled Bodies #1, by Si Spencer and a bevy of talented artists. 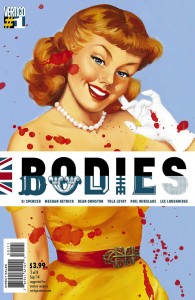 A mystery is afoot!  And afoot.  And afoot…and afoot!  Taking place in four very distinct times (1890, 1940, 2014, 2050), but all within the same location of London, a mangled body of what appears to be a murder victim has been discovered.  Luckily, in each setting a detective arises to begin their investigation; but could it be that they are all trying to solve the same murder of the same individual at the same time?  Who could deserve such a fate?  And how could these diametrically opposed detectives even begin to solve such a case?

I love a good mystery, and Spencer has gone out of his way to set the stage for a doozy of one with Bodies #1.  Add in fantastical elements like sci-fi, the occult, colorful settings of vastly different time frames, and support it with characters that can easily stand on their own though; and Bodies comes together to form a sum greater than its parts.

Like all good mysteries, the weight of the story and the effectiveness of its resolution falls inexorably on how well fleshed out its characters are.  Happily, this is an arena that Bodies looks to excel at.  Each of our leads has a backstory of his or her own, and the introductory vignettes instantly pull you into wanting to unravel their secrets as much as the title mystery.  It is diverse in tone without being scattered (using the crux of the body as a mooring point for each tale helps in this manner), and should help readers find a character of entry by having such a widely different cast of leads.

Another cast that bring this title to life is the artistic team of Meghan Hetrick, Dean Ormston, Tula Lotay, and Phil Winslade.  Like the story itself, each of these artists brings an unapologetically personal style to their respective chapters, all with the exception of the consistently portrayed body that starkly links them together.  Hetrick’s clean lines and modern style instantly place her chapter in the present, while Ormston’s muted greys and shadow-work call to mind the charcoal drawings of the 1800’s.  Likewise, Lotay captures the eccentricity of her future setting with the assistance of Lee Loughridge’s bright colors (the only chapter that could be described as bright), as Winslade continues to show his mastery of period pieces with his 1940’s London.

Buy!  The magic of Fifth Week rings true with Bodies #1 (slated for 8 issues) as it takes the classic period mystery and successfully adds a new element of its own.  While the title mystery will easily be the main draw, the strength of its characters amidst its diverse tone will surprise more than a few who find themselves quickly invested in its leads.