Manga Monday is a column that is usually written by Mara Wood, but she is currently on vacation, so I’ll be filling in for the meantime. Our taste in manga share some overlap, but also vary. I hope I can offer something a little different for the readers here. 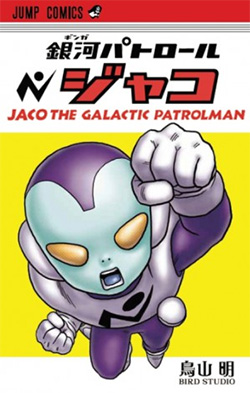 Jaco the Galactic Patrolman is written and illustrated by the one and only Akira Toriyama. He is the creator of one of the most successful comic book series in history, Dragon Ball (It has sold something like 230 million copies worldwide). Toriyama has also done character design on Chrono Trigger and the Dragon Quest video games. Jaco is the first manga to be serialized by Toriyama since his 2000 series Sand Land. The series began in July 2013 and ran weekly until September 2013 in Weekly Shonen Jump, both in Japan and the United States. The Japanese version has already been collected into a single volume, and the English version will be released in January of 2015.

Jaco TGP is like many of Toriyama’s books. It features adventure, bizarre characters, and is filled with humor and gags. Many people remember the screaming and episode-long-powering-up in the Dragon Ball Z anime series, but that really fails to represent what Toriyama brings to the table in terms of story and characters. Jaco TGP reminds me of those early Dragon Ball comics that were all about adventure and were heavy on humor and characters.

The main character of this story is Jaco, who is (SURPRISE!!) a Galactic Patrolman. He was headed to Earth, but after bumping into the moon he crash landed in the sea near a small island. The sole occupant of this island is the old man Omori. Omori came to the island years ago with a team of researchers to build a time-machine. There was an accident that caused an explosion that killed his team and his wife. Omori has remained on the island ever since and has been trying to complete their work with the hope of one day saving those that were lost.

Omori has become misanthropic, and does not care much for the presence of Jaco on his island. However, he agrees to help Jaco repair his ship to get him on his way sooner. Much of the issue focuses on the cultural misunderstandings between the two. It makes for humorous dialog and highlights the chemistry between the two characters.

A third character, Tights, is introduced about a third of the way into the book. She brings youth and vibrancy to the group, and is the most grounded of all the characters.

While most of the book is just the characters sitting around talking, repairing a spaceship, or even just watching TV and eating dinner, it is constantly engaging. Of course this is a Toriyama story, so there is still plenty flying by the seat of one’s pants action by our characters. My favorite part of the book involves Omori and Jaco’s shopping trip into the big city to buy milk and cheese. Nothing could possibly go wrong, right?

With Guardians of the Galaxy right around the corner I really want to make some comparisons, but I don’t think I can force it. If you like Guardians, but are looking for something a lot lighter or sillier (and possibly totally different), then be on the lookout for Jaco the Galactic Patrolman. It is a purely for fun comic and does not take itself too seriously. Unfortunately for all of you,  I read the Japanese version, so I am not sure if all of the humor translates over. However you should still be able to enjoy the relationships between the three main characters.

Oh, and I should mention that Jaco TGP is set in the same universe as Dragon Ball and takes place ten years prior to the start of that series. No prior knowledge is needed at all to enjoy Jaco TGP, but adds to some cameos in the story’s epilogue. There is also a bonus chapter titled “Dragon Ball Minus.” It introduces Goku’s mother Gine and ties in to both Jaco TGP and Dragon Ball.

For about four dollars and fifty cents, I got a nice digest size book that came with a dust jacket, and had over 230 pages of content. You really can’t beat the value of manga compared to many US comics.