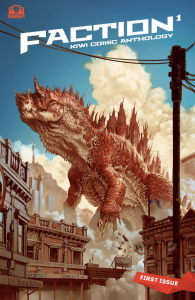 As the title might suggest, Faction: Kiwi Comic Anthology is an anthology featuring creators out of New Zealand. The individual issues are collected in a beautiful soft cover format that feels far superior to our floppies and the overall quality of the book is top-notch, presented with beautiful eye-grabbing covers (the first one is called The Hikoi by Greg Broadmore and it’s stunning). The anthology is put together and edited by Damon Keen and Amie Maxwell.

Like any book accepting submissions for an anthology, the story quality varies from not so great to absolutely brilliant. Some stories are lacking good story and good art. Some stories have great story and so-so art or vice versa. And a few of the stories in here have both. It’s interesting to see the shift in creators and voice as you turn each page, but I would by lying if I didn’t honestly love the higher quality ones over the others. However, I do admire all contributors for putting their work out there and trying to tell a story that they clearly wanted to tell.

I don’t want to focus on the bad parts of it, especially since I think anthologies are such a great way for people to get their start in the industry, so let me tell you about a few of the highlights from the first issue:

June+Bug by Ant Sang – The art in this story wasn’t great but it was the work of someone who has a lot of potential. The story is what really caught my attention and it’s the only one out of the bunch that I went back and read a few times because it honestly gave me chills the first time I went through it. A really interesting concept involving the connection that twins have with one another and more specifically, conjoined twins. It felt like one of the two-sentence horror stories that you sometimes see up on places like Reddit. Definitely an interesting, creepy and unique read.

One Giant Leap by Damon Keen – This was probably my favourite story out of the lot and upon seeing the art, my first thought was that Francesco Francavilla is apparently from New Zealand. Keen definitely has his own style but it feels very noir-ish and he uses the same sort of colour palettes that Francavilla is known for at this point. This story was probably the one that best incorporated both a great story and great art and was my main highlight for this first issue. Funny and then all of a sudden depressing once you realize what’s happened.

Bookish by Jonathan King – This story had a lot of promise but I felt like the story wasn’t quite as fleshed out as it could’ve been. Obviously it’s really hard to tell a great story with only a few pages but this did have a lot of potential and it would be interesting to see a take on this story with some more pages.

Waves, Sea, Leaky, Moby Dick and Fish by Roger Langridge – Ok, admittedly this one wasn’t too great in terms of story, but the art was so delightfully Hergé-esque that I couldn’t not enjoy it. It was pleasing on my eyeballs and that’s a good chunk of why it made it into this highlight blurb for me.

VERDICT
Check it out. I’m not too sure if Faction is available anywhere other than in New Zealand but I would keep my eyes open for it. If you liked projects like Womanthology, then you’ll know what you’re in for with Faction and you’ll enjoy what you see.