Explosions, destruction, and laser beams from the eyes! Sure, Superman #33 has all those things, but they are only second fiddle to everything that else that happens in this issue. Geoff Johns is weaving a more personal story in the pages of Superman that looks at exploring the depth of the characters involved and not how much of Metropolis may or may not get wrecked by a villain. 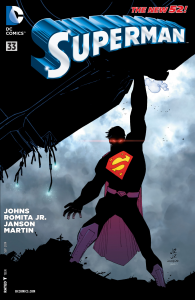 The character of Ulysses parallels Superman in many ways. Except, Ulysses’ home world of Earth was not destroyed, and he is finding out that not everything he thought was lost actually is. Superman #33 spends a lot of time with Ulysses trying to understand and become acclimated with being on Earth. It makes for an interesting dynamic as the alien Superman has to teach the human Ulysses how to be more human.

What I also really liked was the bonding between Clark and Perry White. White is still on a mission to recruit Clark back to The Daily Planet, and he also has some knowledge from an article he wrote years ago that might help Clark/Superman with finding out more of Ulysses’ origin. The pages with White are crammed with word bubbles, but it is not a hindrance. Perry is a news man with a lot to say and not much time to say it. I found myself reading through the dialog quickly, stopping and thinking, ‘hold up. What’d he just say? Okay, wait, no. Keep going. Nod. Yessir. Uh-huh.’ I love it because Johns and letterer Cipriano have me responding and thinking exactly what is running through the minds of the The Daily Planet reporters and Jimmy Olsen.

Romita’s art continues to impress this issue as well. As I mentioned in my review of last month’s Superman #32 I have not always been a big fan of his work, but I am digging on it in this title. With Janson and Martin’s help as well, there is definitely a slightly more cartoony look to the characters here. The tone is light, and events do not feel like the end of the world. It really makes us stop and look at the things that matter in this story, the characters.

Superman #33 is another stellar issue from the new creative team. It is something different than the other Superman titles I have read in the New-52. It is so far, light, fun, and character driven. Be sure to give it a shot, if you have not yet.