By looking at the title of this book you would think that Armor Hunters: Bloodshot is just another tie-in issue to a comic book event. That may be true on the surface, but in actuality the book is something a little bit more. It feels like the natural next step in Bloodshot’s journey. 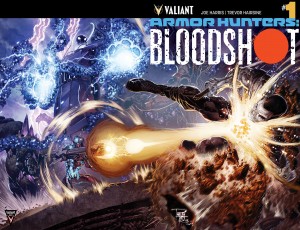 ABack in Unity #8 Livewire headed off to South America to find and recruit Bloodshot in the fight against the Armor Hunters. We do not know much about what he was up to until this point, but we know he was working in the shadows to fight against drug cartels. In Armor Hunters: Bloodshot Joe Harris is working to fill in some of the gaps between the end of Bloodshot and H.A.R.D Corps and the current day situation with the Armor Hunters. This is all being accomplished in the flashback panels scattered throughout the issue. They serve as a nice juxtaposition between the two events, and  add some depth to Bloodshot as a character and to his motives.

The dynamic that Harris works between Capshaw and Bloodshot is just one more aspect of the issue that works to pull the reader in. It is that little bit of humor we find here that helps to diffuse some of the tension of a pretty impossible situation, and keeps the story chugging along to hit the beats.

We also get to see a lot more of a different side of Bloodshot. In the past we have seen a lot of paramilitary skills being put to use. His nanites have hacked locked doors or computers, but it is not something that has been illustrated well in the past. Well, it has been done, but a guy looking at a door and it unlocking is not too thrilling. Instead we get to see Bloodshot use his nanites in a pretty extreme use of their abilities. Hairsine and Baron add a lot to the scene and really show that Bloodshot is NOT just some freaky albino-looking guy with some guns.

In fact the whole issue is beautifully illustrated by the Valiant-exclusive Hairsine. His line work is solid and very detailed. Baron uses a more subdued tone for the flash back scenes. It sets them apart as to not confuse readers, but does not distract from the story.

I was pleasantly surprised by Armor Hunters: Bloodshot. I was not expecting it to be as great as it was. It was engaging and easy on the eyes. I’ve been kind of lukewarm on Bloodshot in the past, but Harris, Hairsine, and Baron have me pretty pumped for the next issue.