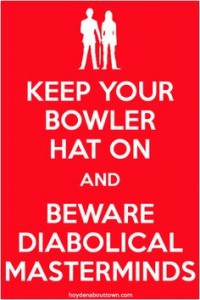 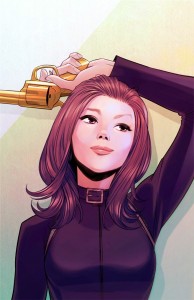 Following up on last year’s  Avengers maxi-mini-series  by Mark Waid, Caleb Monroe and Yasmin Liang, Boom Studios has just released the first issue of a new six-issue mini-series featuring those sophisticated British secret agents, this time around entitled  Steed and Mrs. Peel: We’re Needed, a phrase that to fans of the TV programme is a call to attention, as it was was how John Steed (“top professional”) brought Mrs. Emma Peel (“talented amateur”) into that week’s adventure. The new creative team of Ian Edginton, the first English comics writer to handle this property (no letters please, Grant Morrison is Scottish!), artist Marco Cosentino, and colorist Vladimir Popov have some big boots to fill, as that previous series was one of this reviewer’s favorites of the year, but let me not obfuscate and just state plainly that based on this first issue, they are off to a rousing start!

Much as the original, the story opens with a “pre-credit” sequence that puts us straight into the middle of a murder scene, and as was typical, one with an odd twist, in this case, the odd reaction of an intended victim to the damage to his dollhouse! (Intrigued…I was hoping for that reaction!) 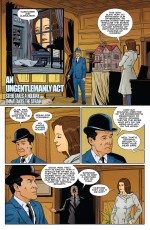 This odd turn of events segues beautifully into Steed and Mrs. Peel assessing the situation, which quickly reveals itself as a rat’s nest of double-dealing , or as Steed puts it “They’re the spies who spy on the spies who spy on the spies”. (Emma’s  response– “Well. that’s certainly enough to make your head spin.”)  The pair take separate tracks to investigate both the attempted killer and the circumstances surrounding the incident, which leads Mrs. Peel to encounter a very-persnickety housekeeper, and Steed to take a jaunt down the coast to an odd little  village filled with “retired” secret agents…hmmm…a sly nod to “The Prisoner”, or a foreshadowing of things to come?

Either way, this first issue is a great and fun romp, and everything that I could have  hoped for, even whilst fearing that it couldn’t measure up to last year’s stellar effort. However, Mr Edginton’s writing is perfect for this property, with a great flair for the chemistry between Steed and Mrs. Peel that was a highlight of the original, and punctuated by a witty repartee that seems as if Diana Rigg and Patrick Macnee are back “in harness”,  once again speaking the lines. The art by Mr. Consento (ably assisted by Mr. Popov) captures the likenesses of our leads, and delivers some wonderful nuances in “performances” through some subtle expressions and the use of body language that will be familiar to fans of the show.

For those who listened to our recent  “Top Five” show, you know my fondness for The Avengers, as it came in second on my “Favorite TV Show” list, trailing only the the original Star Trek, so I’d be the first one to cry “Foul!” if this new series didn’t measure up to either the original show or last year’s comic, but this new series from Boom Studios is quite a worthy follow-up!

VERDICT: RECOMMENDED I’ll be picking up Steed and Mrs. Peel: We’re Needed  as a monthly, as I’m pre-disposed to want a regular dose of these iconic characters, but as Boom did such a great job with the TPB collections last time around that those of you who are “trade-waiters”, will be rewarded, with the variant covers included as a “DVD extra”, and considering this first issue has one by Babs Tarr, the new Batgirl artist, you could do worse as an incentive!

SOUNDTRACK (kinda): Here’s the intro to the US broadcast of the first Diana Rigg season, which the producers thought would help to introduce the characters and the concept of The Avengers to an American audience: