The first chapter in the Harbinger story comes to a close in the pages of issue #25, but the doors are left wide open for the upcoming Harbinger Omegas and Armor Hunters: Harbinger mini-series. “Wake Part II” serves as both a further epilogue of the events that happened in both issue #23 and #24, which may sound a little strange considering issue #24 was also an epilogue of sorts. 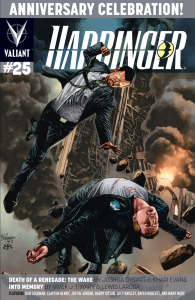 In this story we get to see what happened with the Generation Zero kids after Kris sent their security way in issue #23. Their appearance may only be a few pages, but seeing these kids in action has me excited to see more of them in their Armor Hunters tie-in, also written by Joshua Dysart.

The bulk of the story however deals with how Harada is dealing with the major leaks and exposure of his Harbinger Foundation. Harada has always been an enigmatic villain of sorts, as his motives have always appeared to be to help out society and humanity. Dysart has been building to this moment over the entirety of the Harbinger series, but it looks like we are moving out of the grey zone of hero and villains and more to a black and white spectrum as we head into Omegas. Khari Evans and Brian Reber help to sell this shift and transformation through some raw and powerful art.

The Rest of the Issue

“The Origin of Harbinger” By Joshua Dysart, Lewis LaRosa, and Romulo Fajardo

“A Hero’s Mission” By Lucy Knisley

The extra dollar price point for this issue includes about 20 pages of bonus content and short stories. “Into Memory” and “Cold Brains” stood out to me as both focus on the relationship between Peter and Joe. It was their friendship and Joe’s death that set off Peter on his crusade against Harada and the Harbinger Foundation. These stories just add to the intensity, and for new readers that jumped on mid-series these should help in understanding the importance of what Peter set out to accomplish.

This is a BUY. The extra content is a great value. For only one dollar you get double the content. Harbinger #25 was a fantastic issue that closes up the first chapter and sets up the stage and status quo for events moving forward. Compared to the previous anniversary issue released by Valiant, Harbinger #25 has raised my expectations for future anniversary issues.

Be sure to listen to the Renegades: Talking Valiant podcast for more in depth discussion of each of Harbinger and other Valiant titles.