Two things you should know about me: first, I am a HUGE fan of the Borderlands games; second, I am very skeptical when it comes to cross-media storytelling. I don’t read books about Master Chief or Marcus Fenix, I don’t like playing video games tied to blockbuster films, and there are very few comics based on licensed properties that I will tolerate. I’ve just been burned too many times. But, for more about Pandora and the inhabitants thereof, exceptions can be made. Fortunately, The Fall of Fyrestone is an exception that is worth a look. 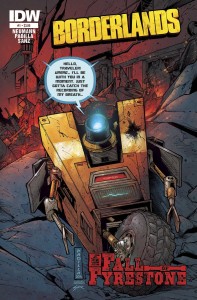 The story begins with our little, uni-wheeled friend Claptrap giving his game-opening schtick to a guy who’s really not very interested. Fortunately, the guy doesn’t last very long. Instead, a bus appears carrying four familiar faces: Brick, Roland, Mordecai, and Lilith. What plays out from here is an extended/alternate version of the opening scenes of the first Borderlands game in which the four heroes begin to band together for fun and profit. Their first task? To eliminate a bunch of bandits, and then hunt down the villain known as Nine-Toes so as to liberate Fyrestone and her people.

Mikey Neumann wrote the first Borderlands game and also the Borderlands: Origins comic series that came out at the end of 2012 through the beginning of 2013. Origins was merely okay: a series of one-shots that introduced the four characters from the first game with the personalities that they ended up with in Borderlands 2. Neumann is also handling writing duties on Fall of Fyrestone, and he seems to have a bit better handle on this multi-part story than he did the one-shots. To be honest, this story wasn’t what I was expecting. I assumed (I know, I know) from the title and knowing that Gearbox will be releasing a new “pre-sequel” soon that the story here would take place between the first and second games. Instead, the story here in issue #1 takes place more at the beginning of the first game, maybe even a little before. It feels like an alternate version of the first few quests in Borderlands 1 with the four main characters more closely resembling the people they become in the second game. It’s a fun idea, and Neumann does a pretty good job of getting down the voices of the characters, including the hilarious babble of the psychos that we all love so well. Marcus loses something in the translation without the excellent voice work of Bruce DuBose, but one can only do so much. Overall, it’s a fun romp into the world that I love so well, and very much worth checking out if you love it, too.

Agustin Padilla also worked on the Borderlands: Origins series, and I have to say that he seems to have stepped up his game for Fall of Fyrestone as well. The characters all around look great and are more consistent than I remember from Origins. Padilla’s layouts also seem to have levelled up and are kinetic and exciting without being difficult to follow. Esther Sanz’s colors are also looking great in this issue, with lots of that cartoonish brightness that we love from the games but also the dirt and grit that is ever-present on Pandora. And make sure to check out Lilith’s phasing–what she herself calls, “Glow time”–brought to you by some brilliant color effects.

Buy it. If you’re a fan of the Borderlands games–or more than a fan, like me–then you won’t be disappointed by this first issue. If you’re interested in the world of Pandora but haven’t played the games, I still think there is a lot to like here. Just know that you might have a little catching up to do. As a five issue series, fans may want to wait for the collection, but what fun is there in that?