I’ve been a fan of Ben Templesmith for a while now, though it seems I missed most of what made him famous. I started following him on Instagram a couple of years ago, and from that became a fan of his art. I was absolutely in love with the Image Comics/Joe’s Comics series Ten Grand, but Templesmith’s run on that ended relatively quickly. After leaving Ten Grand, Templesmith decided to return to his own creator-owned work through the 44Flood collective with The Squidder, which began as a Kickstarter project for a 100+ page graphic novel. Now, Squidder is available to the rest of us through IDW, and while it’s not without it’s problems, it’s a pretty cool idea that could make for a pretty cool story. 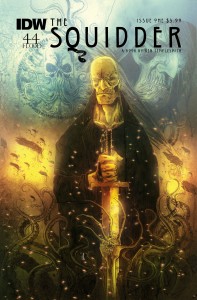 To start with, think of The Squidder as a book that begins well after the end of most action movies. The squid have come to destroy us, cleanse us, etc. and the big action hero failed to stop it. That last minute, Arnold-Schwarzenegger-makes-the-whole-thing-explode ending didn’t happen. So now, humanity lives under the thumb of the almighty squid, though many people seem openly vocal about not liking it. The book opens with a tribe of humans preparing a young girl for what looks like a sacrifice to the squid. It turns out, however, that the tribe is actually the sacrifice, and that the girl is something else. Cut to The Squidder himself, dishing on his post-war nightmares right before he wakes up to find himself under attack by scavengers. His internal and external dialog is not unlike what one might expect from the Punisher or any other hard-boiled killer-type character, except this one’s also got a giant sword strapped to his back. He dispatches several of the scavengers in various terrible ways before they finally speak up for themselves and tell the old soldier that he’s wanted in a nearby town. The most recent self-appointed mayor/despot wants the legendary Squidder for a job. He agrees and they travel to Ridgway, where the old soldier has an audience with Cylas Gardner, who looks like a corrupt sheriff from an old western. Most of their conversation is exposition, and we get a lot of needed information about The Squidder himself–his name, about how old he actually is, etc. But then we find out that Gardner wants the old guy to rescue a priestess of the squid. These are the people that the old man hates most, the traitors to humanity, but in his relentless pursuit of something that will finally kill him he accepts the job.

As a writer, Templesmith does a decent job here. The dialog and captions are a little cliche, but who doesn’t love that kind of thing sometimes. The Squidder is just the kind of character we love to root for: broken, badass, and just sarcastic enough to make him fun to read. I assume that the girl we saw at the beginning of the book is the same one he will be rescuing later in the series. The other characters, while visually interesting, are really just canon fodder and exposition machines. Gardner doesn’t really have a personality, just an attitude and the right dialog. But, Templesmith himself has said that this story is something of a love letter to late 80’s/early 90’s action movies, and in that context all of this is perfectly well-fit.

Templesmith’s art is wonderful in this book as it is in every book he does. I have to say that Squidder left a little pang in my heart for the early issues of Ten Grand, but bygones must be bygones. I can see how some readers may not like Templesmith’s style–his choice of colors, his sketchy figures, etc.–and if you’ve found yourself in that camp, you won’t find anything new here. This is Templesmith in his purest form, in all his glory and with all of the ticks and tremors exposed. For me, though, I love it, and I will probably keep getting this just for the art and let the story carry me along behind.

I want to have a quick word about the lettering. Templesmith does everything in this book, as the inside cover will attest, but the one thing he could have used was an editor. There are several typos throughout this first book, as well as at least one line of dialog without speech or caption bubble. It’s an unfortunate little thing to have to point out, but just too frequent to leave alone. I can only hope that any subsequent collected editions will have these errors fixed, but it also makes me wonder whether the original Kickstarter graphic novel went to press with the same errors. If anyone knows, leave a comment.

Wait and see. There is a lot to like about The Squidder, and it promises to be a fun story, in a gonzo horror kind of way. As with all of the 44Flood stuff, the paper stock that the issue is printed on is thick and heavy and carries the art well, but as a four-issue mini-series–and taking into account the typos I found–I think readers may be just as well to wait for a collected edition. But, as I said before, the story is uniquely Templesmith and worth checking out, little things aside.