It’s been about a year and a half since the death of Damien Wayne, and I have to say that my feelings are mixed about bringing him back. I was quite upset when Damien died–the character was a bright spot on the New 52 that I didn’t see the need to extinguish. Also, the last year of Batman and Robin has included a rotating cast of characters all meant to support Batman as he navigates his extreme grief over the loss of his son. But, that story was starting to wear thin. Now, we have the first of the books that is supposed to bring the boy wonder back to the DCU with Robin Rises: Omega #1. Unfortunately, it falls prey to the increasingly convoluted storyline that began in Batman and Robin, introducing even more complicated continuity into an already complicated series of events. 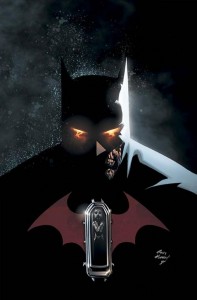 Tomasi and Kubert do new readers a favor and recap the story of Damien Wayne from the POV of Bruce Wayne in the first 8 pages of this oversized book. At that point, we pick up right where Batman and Robin #32 left off. Batman, Frankenstein, a bunch of League of Assassins ninjas, and Ra’s al Ghul all find themselves face to face with a contingent from the planet Apokolips. The visitors are looking for a piece of something called the Chaos Shard. Batman doesn’t really know what they are talking about, but of course, Ra’s does. He’s hidden the piece in Damien’s casket, which he and Batman were only recently fighting over. The two team up to face the aliens and a fight breaks out which lasts through most of the rest of the book. In the course, Ra’s and Talia’s casket are lost down a chasm, Frankenstein loses an arm, the Justice League swoops in to the rescue, and Damien’s casket is taken back to Apokolips. Batman then decides to punch about half of the Justice League to take out his anger before vowing that he will get to Apokolips because there is a way there to bring back Damien. Robin Rises will continue in Batman and Robin #33.

I’ve come to a conclusion about how DC is handling their properties right now. It seems to be a continuity over quality model, in which the goal is all about fan service and accuracy to the past. I don’t want to sound like I’m knocking it–I think it works to hang onto those loyal readers who’ve been around at least since the inception of the New 52. However, I personally don’t think this plan makes for good stories. Yes, it’s cool that this stuff with Apokolips and Darkseid in this book ties back to the first arc of Justice League in the New 52, but I also have to question whether the story itself really needed to go cosmic in order to bring back one little boy. Especially when that little boy’s grandfather is the famously immortal Ra’s al Ghul. Tomasi, usually a writer that I admire, does not give his best performance here. The dialog is good in spots but will often sink to cheesy one-liners at a moment’s notice. There are also moments where characters contradict themselves, sometimes within the same page. A Batman that is upset over the death of Ra’s is suddenly skeptical that he’s actually dead only a page later. Not only can it be confusing, it just seems a little shoddy.

Andy Kubert’s art (not to be confused with Adam Kubert) is the high point of the book for sure. His style here lands somewhere between Jim Lee and Barry Windsor Smith, and I quite enjoyed the big battle between the demon things from Apokolips and the ninjas. He’s also got a really good grasp on the look of Batman, especially this haggered, 5-o’clock-shadowed Batman. I dropped the Justice League title a while back, so this is the first time I’m seeing the new League, which includes Captain Cold and Lex Luthor, so that was also a lot of fun. Colors by Brad Anderson are great here as well. The whole book takes place in snow-covered mountains, which makes all of the colors pop very nicely. Anderson also does a good job using the colors to separate Kubert’s sometimes overbusy panels. Overall, the art in the book plays much better than the story does.

Wait and see. If you’ve been reading and enjoying Batman and Robin and you want the next installment, you almost have to pick up this book. I just don’t see how you could get around it. On the other hand, if you’re a Damien fan and want to jump in on this one to see how he returns, you might want to hang back for a bit. While the beginning of the book does include an extensive recap, you really should have read Justice League #1-6 and the last year of Batman and Robin to get everything here. I have a feeling there is also another story, something about the Justice League smashing the Chaos Shard, that I might have missed. I think it may have happened on Earth 2. If anyone knows what it is, please leave a comment and let me know!